Our trip to Disney was in  August 2012 but since I didn't have this blog then, I am posting it now.  Over time, more Disney Trip related posts will make their way onto the blog.

Granted, I was in the 3rd grade on my very first trip and don't remember much other than my mother trying to choke me out on Space Mountain (that's a whole other post).

But I did go back to Disney in 2004 and 2006... at Christmas.  The first Christmas trip, we made sure to leave before Christmas Eve and head home.  On the second trip, we went during Christmas... actually waking up on Christmas morning at Disney.  The decorations and the feeling were fantastic.  The crowds?  Not so much.  Unless you like standing in line for 160 minutes for ONE ride.

But this trip?  Heavenly crowds.  I read in the Official Disney World Guide that the last week of August is a great time to go since the crowds thin out so much.  And the Guide was right!  SO many of the southern schools go back before Labor Day and most sane parents don't try to take a trip the week before the kids go back to school.  (We have never claimed to be sane.)

But this post is dedicated to the day of the Princess Lunch.  The girls had NO idea that we were going to eat lunch with the princesses.  Actually, they didn't know we were going to Disney until 2 days before the trip.  We had planned and planned for 8 months and somehow never slipped up and told them about going.

When they found out that we could actually go eat in Cinderella Castle and meet so many of the beautiful princesses, they flipped out.  We went to Downtown Disney once we got there and headed to World Of Disney, the biggest Disney store, ever.  There we found each princess has her own lines of dress-up clothing... and plenty of accessories.  Button chose the Cinderella gown while Peanut couldn't see passed Ariel's gown.  (Yes, they have always had favorites.)  We got the gowns, the gloves, the shoes, the little handbags...all of it.

That night after baths, I pulled their hair up into a ponytail and then wrapped all of the hair around foam rollers.  They did sleep like that and even attended breakfast the next morning still wearing them so that the Florida humidity didn't ravage and flatten their hair. 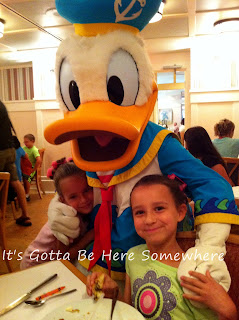 And yes, I did take pictures of them the next morning with the characters without the rollers.

After breakfast, it was time for the makeup.  This was really the first time that they had ever worn anything but chapstick so they were so excited.  And other than trying to blink and make me blind them when doing the mascara, they did great.  Then it was time for the gowns.


This is Button, in her Cinderella dress: 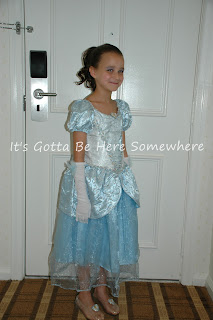 And this is Peanut, in her Ariel dress: 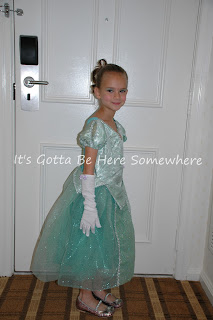 Don't they look so beautiful and regal?  Love it.
However, this is more normal for them: 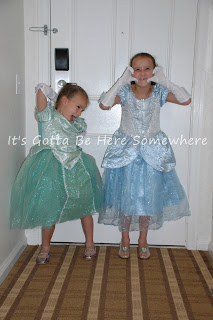 I think they spent 10 minutes twirling around their room and ours before it was time to head to the Magic Kingdom.  They certainly are girly.

We rode one of the Disney buses from the hotel over to the Magic Kingdom.  I think we missed one bus by 30 seconds so we had to wait a few minutes for the next one.  In the meantime, I continued to take photos of them because I just couldn't help myself.

Princesses waiting for their "chariot": 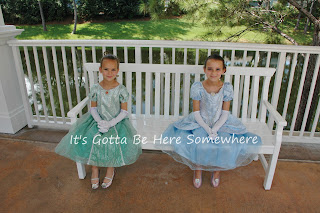 And of course, I had to get a shot on the bus, too. 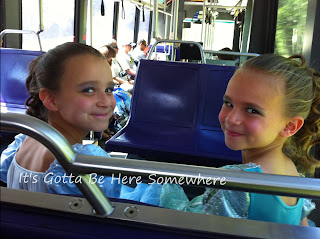 Now keep in mind, when they entered the Magic Kingdom for lunch at the Castle, this was the first time they had EVER seen the park.  But we couldn't stop to see everything because we had a date.  And yes, I snapped some pics along the way.

Daddy with his princesses: 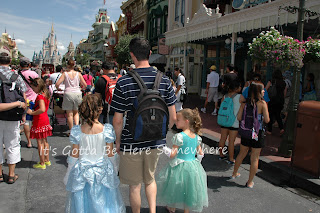 The princesses are almost to the Castle: 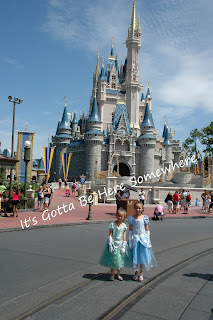 As a family, we always end up getting everywhere early.  And this day was no different.  So we popped in to a little shop next to the Castle and bought them the one thing they were missing... crowns.  The shop sold all of the princess stuff that you can get at World of Disney but it was also attached to the Bibbidi Bobbidi Boutique.  (We could have made an appointment but I chose to do their makeup and hair myself and save some money.  And to be honest, I wasn't thrilled with the way they did hair there anyway.)  In the shop,  there was a cast member (employee) walking around dusting all of the girls hair with "pixie dust" or, a ton of glitter.

And THEN they were ready. 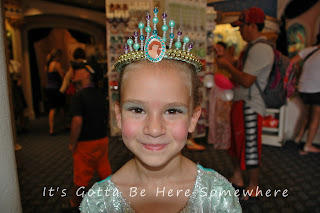 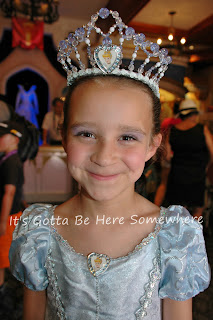 Once we were called in the Castle, we had to wait in this beautiful room for Cinderella.  It really did look like a sort of ballroom in a fairy tale castle.  Disney doesn't spare any expense when it comes to anything.  After a few minutes, Cinderella walked into the room and you could hear all of the little girls gasp.  I admit, she was beautiful and really sweet.  As part of the package, each family had their photo taken with Cinderella before heading upstairs to eat with the other princesses.

When we got upstairs, we were seated near the windows, overlooking FantasyLand.  And we were told that our table was the first stop each princess made when coming into the ballroom.  Score!

The girls with Aurora: 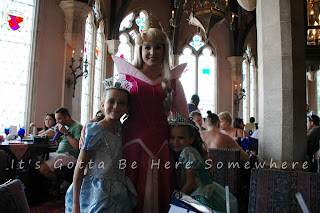 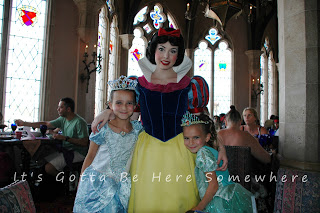 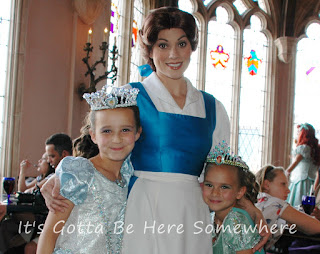 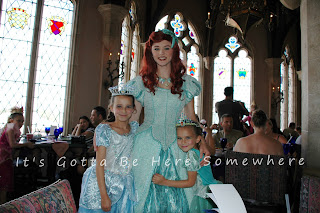 The meal was good, the service was wonderful, and they gave the kids a few treats to take home, including a wand!  Before lunch was over, our photos were delivered to the table.

Yes, the kids got blisters.  Peanut's shoes were sparkly ballet flats and looked harmless.  But on each foot, after walking around a few hours in the horrible heat, she got a nasty blister.  And those shoes just kept rubbing into the blister over and over.  Button's shoes were basically clear jelly shoes with glittery sparkle.  And they left some nasty blisters on each pinky toe.

So, my husband and I had to carry them from the Castle, down Main Street, out of the park, and down to the spot were the buses come in to pick up guests.  I chose to carry Peanut since she's smaller and it was fine...at first.  And then the heat and humidity kicked my rear.  And then she kept getting heavier.  But she apologized the ENTIRE time for growing up and getting bigger.  Daddy carried Button on his back and he wasn't faring much better.  By the time we got near the buses, I was on the verge of dropping my kid.  And when I mentioned it to my husband, Button offered to HOBBLE the last little bit so that daddy could carry Peanut.  We have the sweetest children.

Once we were on the bus, I realized that the excess glitter that normally falls off of a play dress had indeed come off... all over my arms.  And it was stuck.  Seriously.  I couldn't have made it all stick any better to my skin if I had GLUED them on.  I was covered in green glitter while my husband looked as though he had been attacked by a silver glitter bomb.

We spent the next few hours in the pool.

If you want to take your little princess to see Cinderella, you'll need to make a reservation.  The earliest that you can call is 180 days ahead of time and I highly recommend it.
Cinderella's Royal Table

If you want to hit up the Boutique, reserve a time!  It can fill up quickly.  There is a boutique location at Downtown Disney and a location in the Magic Kingdom.
Bibbidi Bobbidi Boutique