We have too much crap

I hate packing. When it comes time to pack for a trip, I dread the hell out of it.
But packing up your ENTIRE HOME is pretty much hell on earth.
Seriously... how do we have this much stuff?

If I find another rogue Yankee Candle in a random place, I'm going to be in an institution wearing a lovely new jacket, just in time for spring in MN.

And picture frames. MY GOD WHERE DID THEY ALL COME FROM??!?!
I found some under the bed, in the closet, beside the couch.... and of course, there were a few on the walls (using what little wall space we have now).
I guess the move will give me a place to put those frames.

I'm exhausted. My husband is exhausted. He said last night that he had a dream about putting boxes together. Not packing the boxes... putting them together. So he was dreaming of that damn tape gun that has to be the most annoying noise on Earth.

Going through the clothing in the closets has been heaven and hell. Heaven in that we are getting rid of lots of clothing that doesn't fit (kids) or that we've gotten tired of (adults) and hell because I cannot count the number of trips I've taken to our local Goodwill. We have to be keeping that placed fully stocked.

We are essentially living with some furniture and a crap load of UHAUL boxes. Under Button's loft bed? Nothing but boxes. Peanut has at least 2 boxes under her bed and 3 more by the window. Sitting here on the couch, I feel like I'm going to be attacked ay any moment by boxes. And one entire wall in the den is nothing but boxes. I'm.So.Tired.Of.Boxes.

Moving day is May 15th. In less than 2 weeks, the movers will show up and shove all of this crap into the truck and we will say farewell to Minnesota. At least until we come back before Christmas to visit the grandparents.

Until then, I will keep packing.
I'm pretty sure that I'm about 2 days from this:

Boldly going where I never thought I'd go

Last week, I had a "suggested post" pop up on FB. 99.9% of the time, this annoys the hell out of me. I usually NEVER care a thing for what FB suggests. FB just doesn't know me. At all.

But that night... FB got it right.

The post was for Wizard World Comic Con in Minneapolis, the first time for that Con here. And while I am not normally that interested in comics or Cos Play, the picture accompanying the post got my attention.

The photo was of Nathan Fillion. And the post said that I could meet him. MEET HIM.
So I zipped over to the site it linked to and bought tickets for my husband and myself for the Nathan Fillion Experience. (I know... in a way it sounds a little dirty.)
I first remember seeing Nathan in Buffy the Vampire Slayer as Caleb in season 7. And then he was in Firefly. You might not have seen of heard of Firefly but I bet you know Castle.

I didn't tell my husband until after I had bought the tickets. And even then, I just handed him the printout of the tickets and let him read and find out naturally. His reaction was priceless. And yes, it was happiness.

And to make it even better, I bought him a photo op ticket for William Shatner. THE SHAT! My husband has always been a fan of Star Trek and even though I never watched it much as a kid, I did watch a few of the movies.
And of course, The Shat played Stan Fields in Miss Congeniality.
He also played Juliet's dad in Psych.

Of course, I had to add Adam Baldwin. It's Jayne Cobb from Firefly, duh! And he was in Angel. And Chuck.

And while I was at it, I added James Marsters (Spike from Buffy and Angel). I HAD to meet Spike. I loved Spike. And you're not usually supposed to love the bad guys but Spike was the shit.

The rest of the week, my husband and I were giddy at the thought of meeting Mal, Jayne, Spike, and Kirk. (You know you usually think of your favorite celebrities by their character names, too.)
We told the kids we were going (and so were they) and they seemed happy enough. We knew not to expect much since they've never seen those shows.

Saturday morning I got up early as hell to do my hair and make-up. I don't normally care to do either but when you are going to meet famous people and have your photo taken with them, you try to not look like the walking dead.

We got downtown and entered the Con around 9:45. It was a sight to see. SO many comic books, t-shirts, buttons, and incredible artwork by comic artists. We walked around and tried to look at everything but there was a lot of.... everything.

About half an hour before we were scheduled to get a photo with Shatner, we got in line for the photo. (The website said not to be late and recommended at least get in line 15-30 early.)
Once that line started moving right at 11:10, it went QUICK.

We walked in and were instructed to put our bags on a table, hand over our photo ticket, say HI to Shatner and smile. Then we got a stub to collect the picture later and we were out.
(They have that shit down to a science. No dallying. Everyone gets equal time.) 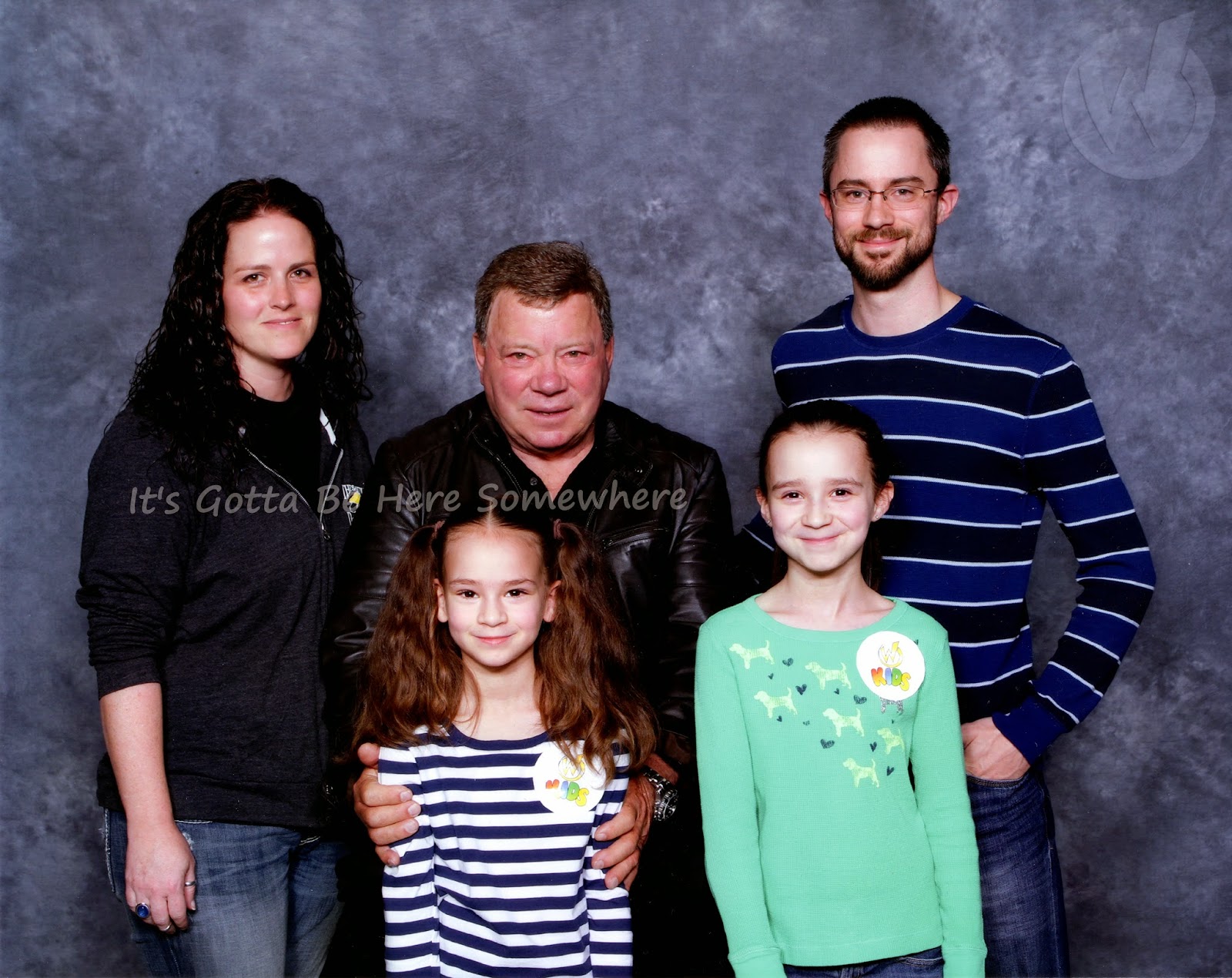 When we came back out, we basically got right back in line to meet Marsters. When I saw him, the only thing that popped in my head to say was "Spike". And I did, with a smile. He's shorter than I expected. And I love that in the photo, he was Spike with that snarl. 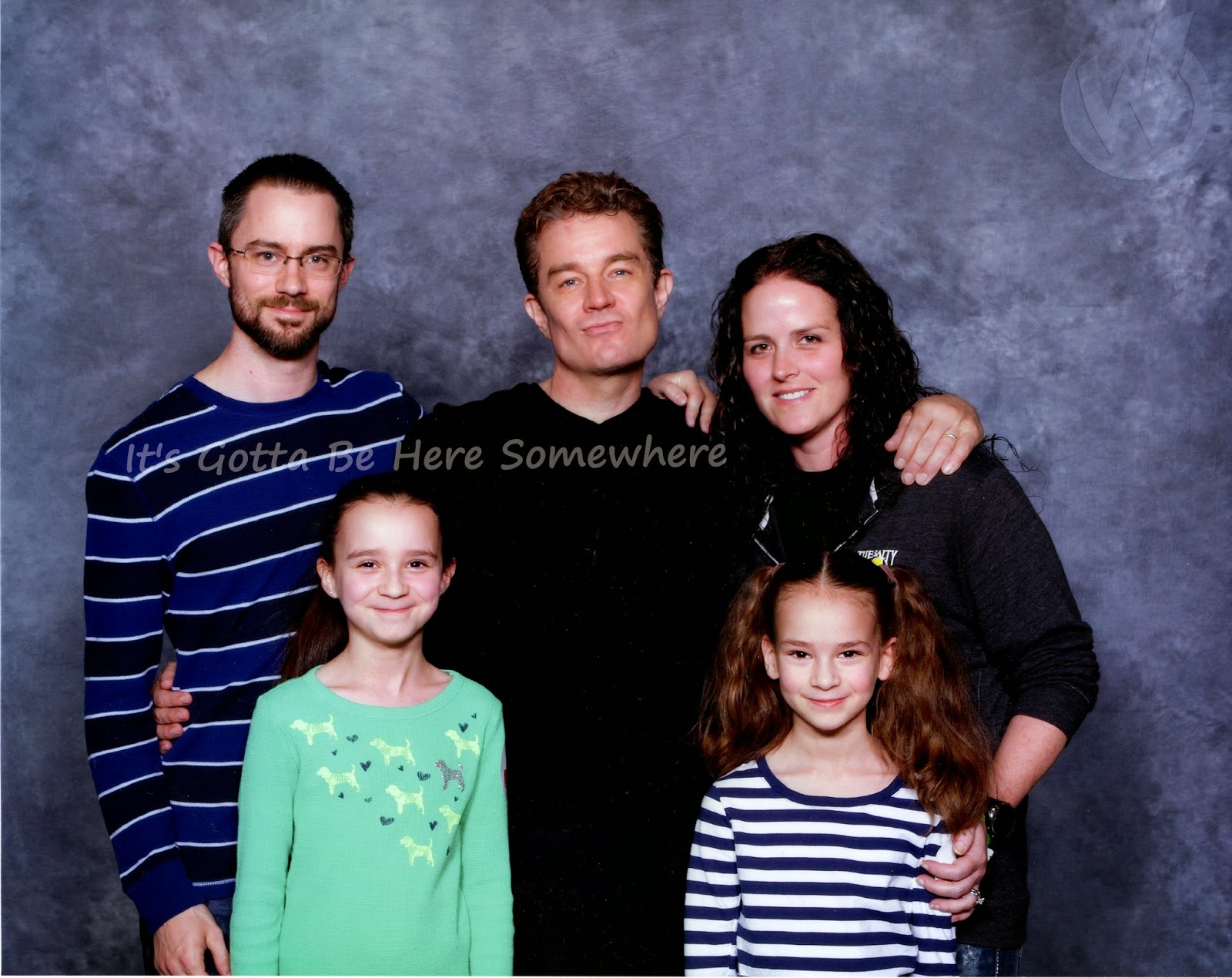 After that photo, we hopped BACK in line but this time we were in the VIP line to meet Fillion. I admit, I was a little nervous on that one. It's Malcolm Reynolds. It's Rick Castle. Holy shit.

He was just as handsome in person and really nice. He told the kids to smile and pretend that he was cool in the picture. Peanut responds by giving a thumbs up with a smile. It was over so fast.
But it was worth it. 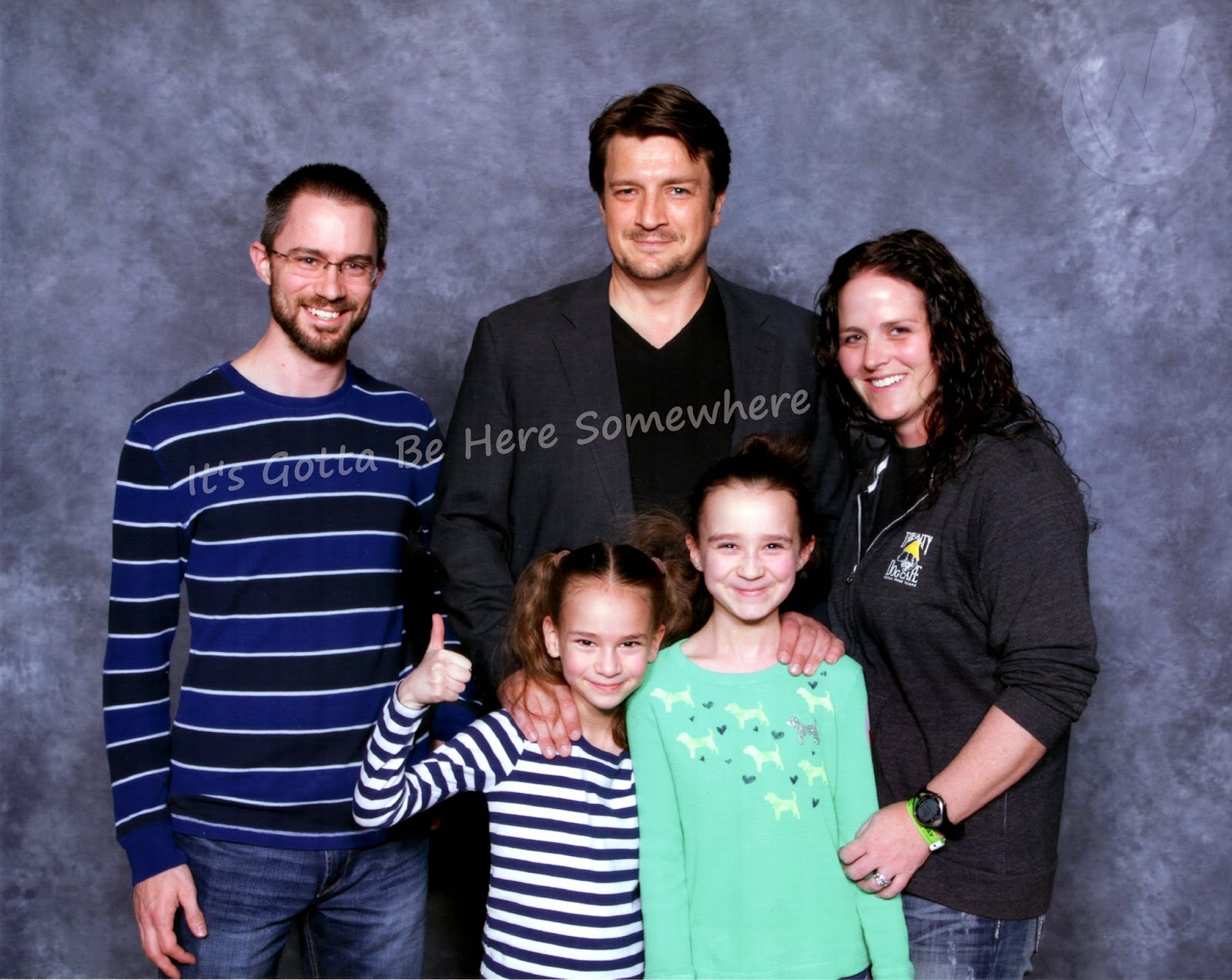 After the photo with Fillion, we had a chance to get OUT of line and grab a bite to eat and just sit for a few minutes.

By 2:00, we were back in line for our last photo of the day with Adam Baldwin. I knew he was taller than Fillion due to them co-starring together in Firefly and an episode of Castle. But damn! That man is tall! And super nice. 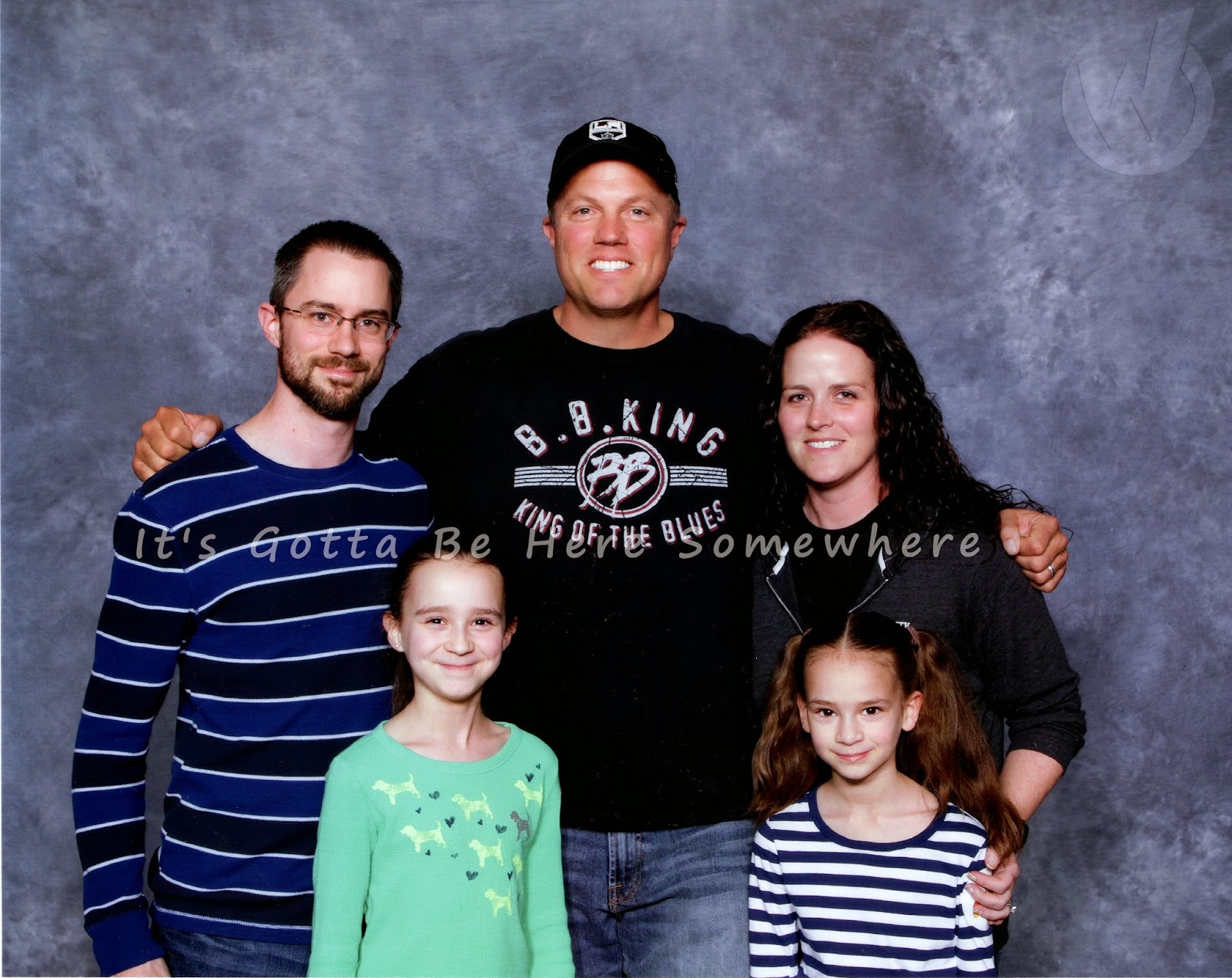 After that, we looked around a little again and then got in line for Fillion's next autograph signing. While in line, I saw a few celebs walk by on their way to and from the photo rooms. I saw Sean Astin (to me, forever Mikey from The Goonies) and Robert Englund (Freddy Krueger) and also saw Shatner and Marsters go by.

My husband and I both got an autograph and got to talk to Fillion for a moment. He remembered us and was just a truly nice guy.

My husband's choice:
Then we headed to get a drink and take a break before the Q&A Panel with Fillion and Baldwin. Having a VIP ticket got us fairly good seats for the panel and we had a BLAST. Seriously... those two together are hilarious. I laughed so much during that time and even Button got a few jokes.
(While waiting in line for the panel, we saw Michael Rooker of The Walking Dead go by.)

After the panel, it was time to go home. We were downtown for 8 hours and 41 minutes, according to the parking garage ticket when we paid it. My feet and legs were tired and I needed food and a nap after our day.

But it was a blast no matter how tired I was when leaving.
The kids had a blast and they can now say they've met 4 celebrities and have seen way too many rear ends poking out from under costumes at the Convention Center.