Yesterday, I saw a post by Liz over at According to L about one of the things we fear our small kids will do and pray that they don't... self haircuts.

I feel her pain.

When Peanut was 2, Button decided to cut her hair for her. (Button also cut a tiny bit of her own hair but since she had so much, it wasn't that noticeable. Of course.)

Button cut so much off the top of Peanut's hair, she was left with a mullet.


The only thing we could do with it was cut the rest off and leave her with a pixie cut (which looked like an intentional haircut not like Edward Scissorhands came over).

All was fine until early October 2010, shortly before Halloween.

The girls were with their bio mom that week and for some reason, she refused to do anything with their hair. Ever. And Peanut HATED her hair in her face, probably due to the time her sister cut it off. (The growing back process irritated her.)
Since it was down and not parted at all, it was bugging Peanut at daycare. While no one was looking, she grabbed every bit of hair around her face and cut it off, right at the scalp up front.

It was awful. We were so horrified. And furious. (More furious at the adult who didn't do a thing with her hair that day than at the 4 year old that was so tired of having hair in her face.)
There was just nothing that could be done with her hair for a few months. We had to be patient and just try to get it to lay down in front and pass that part off as really bad bangs. (Thank goodness she did this a few months AFTER the wedding and not before.)

Peanut was also mortified. When she looked at what she had done, she cried. And then she had to look at it every.single.day. I think she tried really hard not to think about it.

So for Halloween, her costume had a hat. 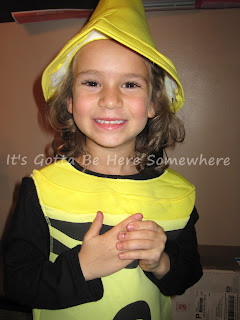 Her school pics at daycare were taken around Thanksgiving and we sent her in this outfit, with the hat. (Luckily, MN winters get so cold, no one looks twice at a kid wearing a hat inside.) 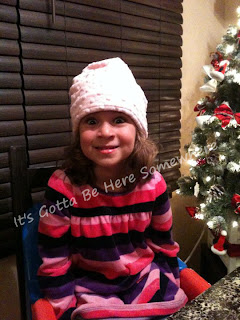 At Christmas, the front was long enough to do a 'sumo style' ponytail. (I did have to put it as close to the forehead as possible for it to work.) Kind of looked like a whale tail. 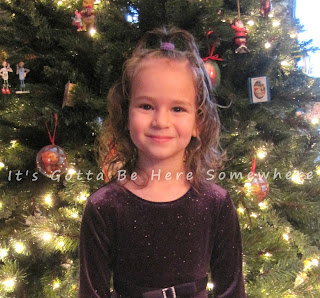 It was June the next year before I could get her hair into pigtails again. And we were all so happy when that day finally came. 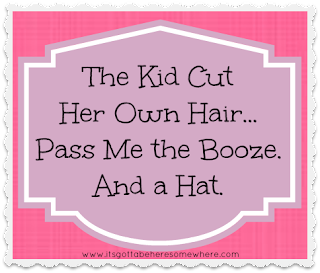