Kids on a road trip


If you are a follower or friend of mine, you know that I loathe traveling by plane.
And I've posted (briefly) about the very first trip in the car with the kids.

This post is about the 2nd road trip that we ever took the kids on... Minnesota to Disney World.

At the risk of being labeled a 'mean parent' or something else, I am going to tell you something that drives my mother nuts.

We don't have ipods or ipads for the kids. (My mother has offered numerous times to buy them.)
They don't have phones. (They're 7 and 9, why in the crap would they need them?)
And they don't have... dun, dun, duuuuun..... video game players. (Their bio mom bought them each a Nintendo DS but she keeps them with her. She won't allow them to bring them here.)

Yeah, go ahead and judge.

The reason that our kids don't have these technological time sucks?
They don't need them. At least, not yet.

On the way to Disney, right when we crossed into Tennessee, I gave the kids 2 large bags. Of what? Pipe cleaners.

Yes, pipe cleaners. We found some at a learning store and decided to see what they would do with them in the car. (At the Y after school, they were ALWAYS making rings and snails out of them.)

They had two bags of different kinds. One bag was the skinny pipe cleaners in normal colors and sparkly ones (the ones you see at any daycare or school). The other bag was full of jumbo pipe cleaners. It looked like a bag of bright colored caterpillars.

And let me tell you... those kids sat in the back of our car from the TN state line all the way to Macon, GA (about 5 hours) and played with those things. (We made a short stop in Chattanooga to see my mom and they were totally bummed that they had to stop creating.)

The next day, they played with them again from Macon all the way to Disney (a little under 6 hours).

The kids were born and raised in MN and have not really been anywhere near a mountain. On the way to Chattanooga from Nashville, you actually drive up and down a mountain. The kids knew this and were really excited about it. But apparently the fun of pipe cleaners was too much for them.

And when we were getting close enough to Disney to see Cinderella Castle in the distance? Again, we had to force them to put down the pipe cleaners and look out the windows. (Of course, once they saw Disney, the pipe cleaners were forgotten... until the trip home.)

Out of the two kids, Button is the most creative right now. While she made a plethora of things with the pipe cleaners, Peanut chose to make a ton of bracelets (and a handy carrying circle for all of them). And she didn't keep them all. She made a bunch for my mom and a bunch for me. She also made microphones for me to use to sing in the car.

Here's Peanut wearing some of her bracelets that she made with pipe cleaners: 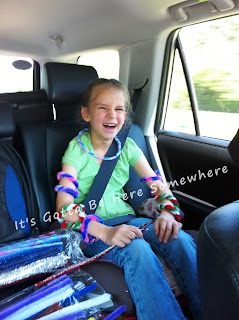 And with her "glasses". 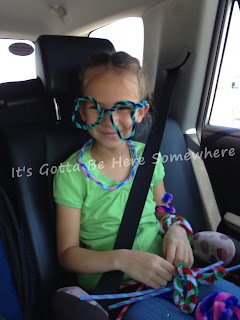 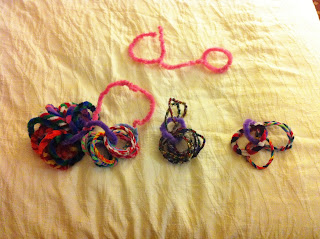 The pile on the right is for my mom. The pile in the middle was for me. The rest were for herself.


And then there was Button. Instead of sticking with just bracelets and necklaces, Button made several things, including my favorite: 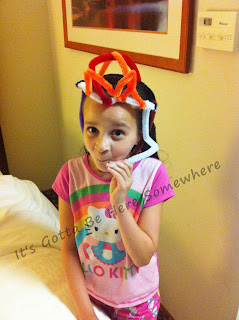 Yes, that's a headset. And she wore it the entire way to Macon once she made it and all the next day on the way to Disney.
In the car, wearing her headset: "Report. Report. My sister is a weirdo. Report."

Playing her "drum" while wearing the headset and sunglasses. 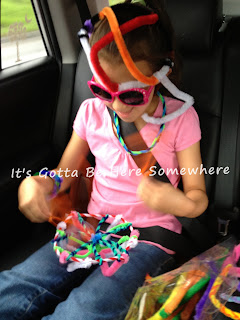 This is the plethora of things that Button made during the trip: 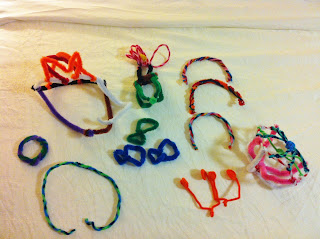 Top left- Headset
Bottom right- Her drum and two orange drum sticks
Also included: a flower pot and flower, a few rainbows, a few fish, a necklace, and a bracelet.


On the way home, they were running out of pipe cleaners. So we told them, especially Peanut, that maybe they should undo a few things and reuse them. And they did.

On the way home, Peanut made a Mickey and Minnie Mouse. Each had a water bottle (because water is important to stay hydrated, she said) and I believe Minnie had a purse. I cannot for the life of me find either of them.

By the time we got home, I think there were a handful of pipe cleaners that never got used.

And please, don't pity our children because they don't have video games. They have played with the Nintendo DS's a few times and they liked them okay. But they have never once asked us for one. They have a lot of cool stuff to play with in their rooms. (Button will play with her Lego's for days while Peanut prefers to play with everything she owns, back to back.)

The one electric gizmo they have? My mother bought them CD players this last Christmas. I cannot tell you how much they love them. While some kids are sitting or laying around staring at video game screens, these kids are dancing, bopping, and singing all over their rooms. Exercise!

Button's birthday is coming up. And what did she ask for? 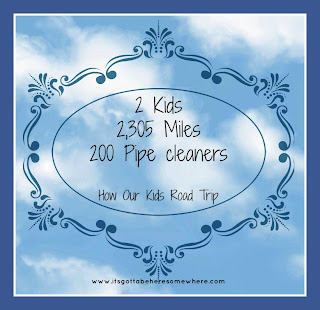