What I Love Wednesday- Oct 2


Those that have read my blog before, all 10 of you, know that I am on a journey.
I am trying to lose my excess weight and keep it off.

I know that walking is one of the best things that you can do for your body and it's far less damaging than running. (I am not a runner... unless an axe wielding maniac is right behind me.)
But how much walking should I be doing a day?
I have no clue, honestly.
But I know that according to most online polls, people who use pedometers are likely to walk twice as much a day as those who don't use a pedometer.

So I went looking for a great pedometer.
And I was irritated beyond belief at the pedometers that I found.
MOST of them are meant to be worn on a bed, put in your pocket, or even slipped into your purse.
My purse? I sling that thing around daily. Yeah, I'm sure my readings would be super accurate.

And on hips?
As some of you may know, all people have a different gait.
One chick may swing those hips while walking like she's sashaying down the runway.
Another chick may barely move any of her upper body while she walks.

And then there were the bands.
I actually do have a Nike Fuel band.... but it's not quite as accurate as I'd like.
It's worn on the wrist, not on your hip or shoe.
I wore it solid for over a week and I can tell you, it wasn't accurately tracking my steps.

And now Fit Bit has come out with the Flex, also worn on the wrist.
Reviews on it vary. Some love it, some say it's constantly fogging up in the shower.

I wanted a pedometer made to go on my shoe... you know, shoes... that go on feet... the things on your body that actually take the steps that you track?

But oh my word, it was hell finding one.
Some of them claimed that you could wear them on a shoe but people complained that they were too bulky and slid off easily.

Finally, I stumbled across an about.com page that listed the best pedometers, as voted on by readers.
The overall winner was the FitLinxx Pebble. 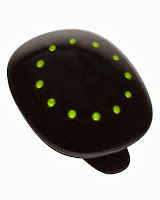 That was exactly what I was looking for in a pedometer. ****
Something small, something lightweight, and something that was accurate.

One problem, though.
It only had info on corporate programs for these pedometers.

BUT then I found the tab about their "Partners" and found myInertia.
This site does have corporate pricing but they also sell to individuals.
The pedometer is $59.99 and the 1st 4 months of using myInertia's online site is free. (After the initial 4 months, it's $4.95 a month to access your info and use the site.)

I then used The Google to find reviews of the Pebble. I found a great one by a guy named Ben on Walker Tracker.
I admire anyone that wears 3 pedometers at a time. How else can you compare the accuracy of readings?

I ordered mine last week and recieved it within just a couple of days.
And I love it.
You get the pedometer and a USB stick, the little tiny ones that you forget are there.
Anytime you walk near the computer (it must be turned on), it offloads your data.
Meaning, you can stick the USB stick in your laptop and travel with it. It can always be with you and as long as you wear the pedometer, you have a step count.

I have counted off in my head steps around my house and then went to see if the pedometer agreed.
And I'm thrilled to say that it's accurate. (It does have a slight delay when offloading to your computer but that hasn't bothered me at all.)
It's small enough and light enough that I do actually forget that I am wearing it.

Since I've had it on, I find myself pacing a lot, building the number of steps a day.
And let's face it, the more I walk, the more weight I am likely to lose because I'm up and mobile, not beached on my couch eating chips.

It should also be noted that your friends and family can get a Pebble as well and you can challenge each other and see who can clock the most steps.
Sometimes, accountability and competition are key.


**** My sister/BFF works at an health insurance company. They are always offering incentives to their employees to 'get healthier'. A few years ago, she was given a small pedometer for her shoe and the more she walks, the more she gets a small incentive bonus for walking.

Since I don't work there, I couldn't get one.
But it was her pedometer that I had in mind when looking.
Lo and behold... the pedometers are from the same company, FitLinxx.

Labels: Rocky Road to Healthy, Weight Loss, What I Love