For the first Things I LOVE post, here are the current obsessions: 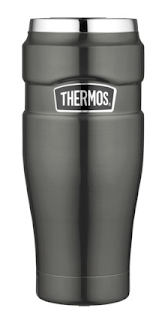 Seriously. The best travel coffee mug ever. (And I've tried a lot. I've Googled a lot.) This thing is making my life so much better. It keeps coffee HOT, not warm, for hours! Yes. Even when the mug is sitting out in 50 degree weather in the garage three hours later, it's still hot. Still trying to get used to that. With my old mug, 3 hours later the coffee was lukewarm, at best. I could take a swig and it was okay. With this one? You forget and take a big swig and scald the back of your throat.

~ It's cool to the touch no matter how hot the coffee or tea is inside. Love that.
~ It is leak proof. As in, once I closed the lid I shook the hell out of it upside down and not a DROP came out. Woot! Perfect for mixing your sugar/creamer/whatever up after it sits a little while.
~ The lid comes apart...into 4 pieces! YAY! No more hard to clean lids that get that nasty, gunky coffee build up over time. LOVE that.

The only downfall anyone talks about is that the finish can peel off over time. (Yeah, keep dropping it from a moving car, letting your kid used it as a toy, and shove it into a backpack on a commute and see what finish wouldn't peel off.) If that's the WORST thing about this mug, that's totally fine. I don't really care what it looks like. I care that it keeps my happy juice HOT. 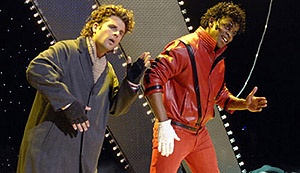 Yes, that's Shawn and Gus as part of Tears for Fears and Michael Jackson. You can watch the performance here. This was the "America Duos" episode (an homage to American Idol).

And yes, that is 3 members of The Breakfast Club with Anthony Micheal Hall appearing this season. Now they just need Emilio and we're good.

And tomorrow night? The homage to CLUE! Guest starring Lesley Ann Warren (Miss Scarlet), Martin Mull (Colonel Mustard),  and Christopher Lloyd (Prof. Plum). Too bad Tim Curry played Nigel St. Nigel in "American Duos". He would be great in this episode.
And for the "100 Clues" episode, the fans get to vote for the ending.

I love this show due to their interactions with fans. In February, they had a Psych Slumber Party on USA. It started at midnight EST and ran until 6 am. It was 7 episodes, very little commercials, and Twitter was blowing UP for about 24 hours.

James Roday (Shawn on the show) is a huge Twin Peaks fan so they let him do the "Dual Spires" episode as an homage. And WOW the amount of Twin Peaks stars that were in that episode: Dana Ashbrook, Robyn Lively, Sherilyn Fenn, Lenny von Dohlen, Ray Wise, Sheryl Lee, even Catherine E. Couslon (aka, The Log Lady).
It was brilliantly done. I even have a board on Pinterest dedicated to the show.

And me being an 80's fan, there are SO many references in the show that make me laugh hysterically.

The writing is great, the actors are so talented, and the theme song is so catchy, it gets in your mind for days. (I assigned it as a ringtone when my husband calls. You can hear it and watch a montage of clips here.)
And what show do you know changes the theme song at times for the theme of the episode? It's been in Spanish twice now, Curt Smith from Tears for Fears sang his version, the Boyz II Men a capella version has been on the show twice, there was a Bollywood style, a Christmas-y jingle at least 3 times for the holiday episodes, and of course, the Twin Peaks/Dual Spires version. (I cannot find Curt Smith's version, or the Dual Spires version on their own so if you watch this video on YouTube, you can hear all of the variations from the first 5 seasons.)

It's USA Networks longest running show to date. We know they get at least one more, season 8. Here's hoping they get to 9!

Sorry, I think I went off on a Psych tangent. That happens!