I Want to Tear Something Apart

Spring is actually peeking in on us here in Minnesota and it's bringing out my want need to destroy something. It's very therapeutic. You should try it.

No, not something that belongs to someone else.

We have done a lot to this house. My mother-in-law owns it and we went it from her. It's a decent size but the four of us have a really hard time fitting into it. A few years ago, we were dying to move out. But then we decided that since it wasn't time to move, it was time to improve.

It started with making a loft bed for Button. (Post about that coming soon.) And then somehow, it turned into let's rip up the carpet-let's destroy the kitchen-let's gut the bathroom. And so we did.

From start to finish, it took about a month. Below are collages I made of the changes that we made to the house back in the fall of 2011.

Gross. Looking at these pics again makes me wonder why it took us a few years to rip that nasty mess up and toss it.
~As you can see in the first pic on the left, there was a little wear and tear.
~The second pic? Yeah, that's carpet from the hallway laying next to the stairs for a comparison in fading and ick. (I tried cleaning those stairs about 6 times.)
~Then you see where there was water damage to the carpet pad.... AND how it seeped into the sub-floor. And then we had to remove the entire sub-floor as well due to the people that built this place used nails, not screws. Talk about SQUEAKING.

It was horrid. I went to town on that carpet with box cutters. Seriously, I felt a little maniacal and got slightly worried. But I got over it.

~First pic: New sub-floor and then a vapor barrier.
~ Ooooh! It's happening!
~ Hey, there's my hard working husband installing our gorgeous new floor.
~ All done! (It's not the orange in real life. My camera was being a turd and the lighting in the room back then was severely lacking.) And yes, that appears to be the original Parent Trap on TV. 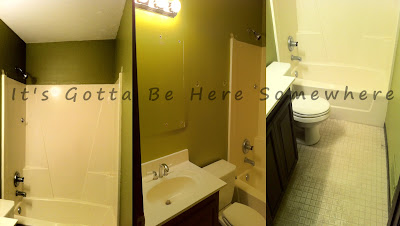 That green paint seemed like a good idea in the beginning. But within a week, we hated it. Before this gutting of the bathroom, we had already replaced the 20+ year old bathroom tile and painted the walls that nasty green. Gross. 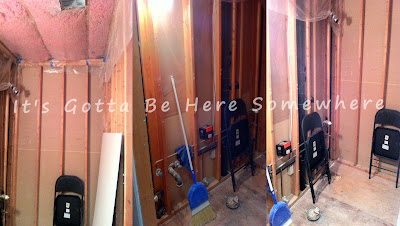 Yup. The only way to go... all the way (down to the studs.) Tearing those walls out was a great way to relieve frustration and it was exercise.

Oh yeah. This is much better.

~ First pic: That tub is SO much better than the old one. It's deeper so ADULTS can actually get into a bath and have the water cover more than just your back half.
~ Second pic: We found the medicine cabinet at IKEA. My husband recessed it into the wall slightly so that it didn't stick out so far. The little boxes next to are supposed to be the other direction but this way, the shelves became boxes. Instant storage shelves.
~ Third pic: My husband and I tiled the entire shower and the floor. We are so happy with it.
~ Fourth pic: I found the vanity at Home Depot...slashed down over 100 bucks. I think we paid less than 40? I sanded it down and stained it to go with the rest of the house.
~ And the shower curtain I found at Targer just really went with the colors we chose.

I used to hate the kitchen. It is fairly large but the design layout left me with very little counter top space and storage. The space wasn't utilized correctly. I documented the kitchen more than the other rooms. I think by then I was actually remembering to get the camera out.
~ First pic: The cabinets were painted this DEEP chocolate brown. Seemed like a good idea at the time. But it was WAY too dark.
~ Third pic: Why, yes. The people that built this kitchen STAINED THE WALLS behind the lower cabinets. We still haven't gotten over that.
~ Those cabinets are my doing. We bought Finish It Yourself cabinets at Home Depot because it was so much cheaper to do the finishing ourselves. I sanded, stained, sanded, poly-ed, sanded, poly-ed, sanded, and poly-ed those all by myself. Every cabinet. Every door. (The color is more of what you see in this pic. I think it was called Coffee.)
~ Last pic: The cabinets are so dark here due to the lighting in the room when I took the pic.

~First pic: Those corner cabinets were a NIGHTMARE. They were not helpful, being those 4 foot long blind cabinets that you have to crawl into to find anything.
~ Third pic: Oh, look. More stain on the walls.
~ Fourth pic: It's getting there!
~ Last pic: Oh yeah. That's why the lighting was off. I had the cabinet lights on, not the overhead lights. We put lights on top of the cabinets, in 4 of the cabinets, and under the cabinets. I love, love, love all of the different lighting, all controlled by independent switches.
And the corner cabinets on the bottom are now Lazy Susan style which makes my cooking life SO much easier.

~ Firs pic: See what I mean about not using the entire space? The cabinets and counters just STOPPED at the fridge but there was still space to work with on that other wall.
~ Second pic: That stain on the wall is killing me.
~ Third pic: Oh, WOW! PANTRY SPACE. The lower cabinet has a Lazy Susan and it makes storing cans and whatnot so much easier. And I got myself more counter space! And a nook for the recycling! It's a win-win-win!

The ONLY problem that we had throughout the entire thing was the counter tops.

We went to Home Depot and picked quartz for it's beauty and durability. The company had grades A-E, A being the cheapest. We knew we could afford the B range so we picked out what we liked and headed over to schedule the measuring and install. Then we picked out the backspalsh to match.

The guy that came to measure was cool. He loved the cabinets (woot!) and did his job. And that was where he went wrong. He didn't turn in the measurements when he was supposed to and it was going to push the install back over a week. (At this point, we had slabs of unfinished wood being used and it was hell. Splinters!)

My husband talked to some lady at the company. She was not happy with our service and wanted to make it right. She asked if any other rooms needed counters. No. So she offered to let us upgrade the type of quartz, for free. We were weary about asking... how much of an upgrade? Uh, how about letter E!!! Yes, we got to go back and pick out a color of quartz from the highest price point they offered. We were ecstatic! And since the new didn't match the backsplash, we had to return it and get something else, which turned out better and a dollar cheaper per square!

Then the guys came to install it and again, the measuring guy screwed up. He had marked us as having an undermount sink on the form but put in the order for a DROP IN. We were livid. The guys installed the rest of the counters and then had to take the longest piece (and our sink) back to the shop to fix it. But the lady we had already talked to called and set it all right. They manufactured a new piece THAT NIGHT and gave us a free gift (see pic below). 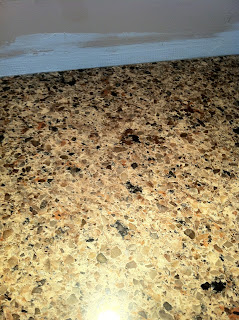 And our free gift: A matching cutting block. 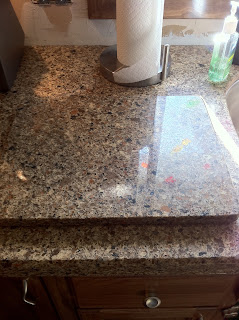 Sometimes, even slip-ups can result in wonderful fixes. We got hooked up for that guy screwing up.

Even though we really will need to move soon due to the space being limited and the girls growing, we can defintely handle living here a little better now. I love my kitchen. I love my floors. And I love the bathroom (although I would really love to have one of my own. 4 people sharing one bathroom is not fun. Not at all.)

Next renovation project: Destroy the back deck before it comes crashing down, killing us all. 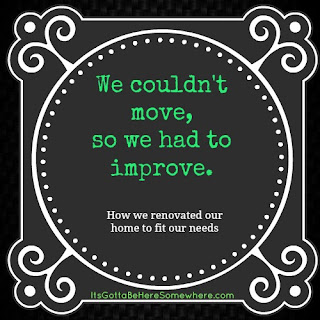