It's mid April in Minnesota but looking outside, you'd think it was February. And since it's been a long winter, this is long post about winter.

I remember April 6th being in the mid to high 50's and the yard was clear of snow. (That nasty brown stuff is grass, if I remember correctly.) 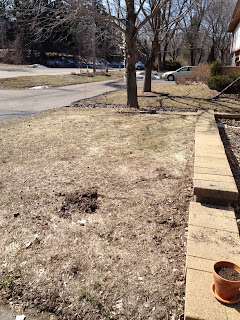 And the last of the plow assembled snow along the driveway and berm was melting fast. 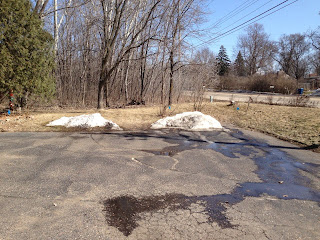 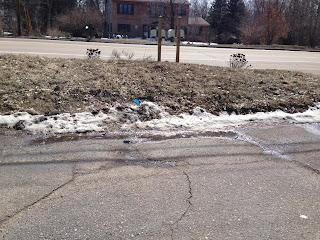 (Man, that stuff is gross once it sits too long. Snow starts out falling as white and by the time winter is drawing to a close, it's a mix of black, gray, and brown. Ick.)

I was so happy that day. I sat outside in the SUN. I had on a light fleece jacket that I almost had to take off due to finally feeling the sun's warming rays again after so many months of feeling nothing but cold air trying to choke me.

Spring was coming and we were all getting excited. People started putting their winter coats and boots back into the closets and some people started hunting down the flip flops.

And then a few days later, Winter Storm Walda decided to show us that it's not over until it's over.

When my husband showed me the forecast for that storm, I admit... I cried a bit. Seriously. I thought "this hell is never going to end". Woke up two days later with the yard and driveway covered, yet again, with the white mess.

Will this nightmare ever end? I feel like I'm stuck in the movie Groundhog Day.

I grew up in southeastern Tennessee. When I was younger, we got a little snow maybe twice a year. And we loved it. (The most snow I can recall was the Super Storm of 1993. It hit during our high school Spring Break. We were hit with 20 inches of snow in about 24 hours. Unheard of for that part of the country. Two days later, I think the temps went up into the 70's.)

After that storm, we were lucky to see a dusting of snow each year, which is probably best because even that dusting would shut the city and schools down. (No use trying to find bread or milk at the store because of the HUGE dusting coming in that would have us all locked away in our houses for weeks.)

I moved to Minnesota 5 years ago. And yes, I knew there would be snow. But I also knew that humidity here, at least my area, wouldn't be anything like the south. (Curly hair doesn't do well in humidity. I hate humidity. I prefer being able to breathe.)

The first winter (2008-2009) wasn't too bad. Not a ton of snow due to it being so frigid. The windchills were about -25 for days at a time and when it's that cold, we don't get a ton of snow. But I can handle the cold more than the snow. Snow gets all over my car, inside and out. We track it into the house no matter what. And when you're at Target, the sound of squeaky shoes makes me want to punch someone.

The third winter (2010-2011) was hell, even by this city's standards. (4th snowiest winter in Twin Cities history with 86.6 inches recorded at the airport.) Our average for the year is usually between 45-50 inches. I remember the weekend that the storm hit. The plows were throwing some HEAVY snow around and it caused our mailbox to break off and die.

Here you can see they were already leaning during the first part of the storm from the heavy amounts of snow thrown by the passing plows. 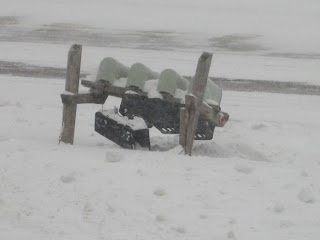 We found this the next morning.

In our yard, the wind caused what looked like sand snow dunes. 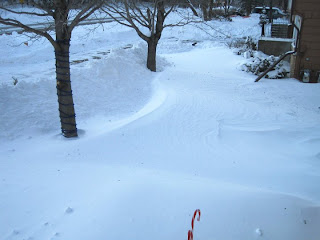 And until we could fix the mailboxes (and start receiving mail again) we stored them on a snow ledge in the yard that was never there before the storm. 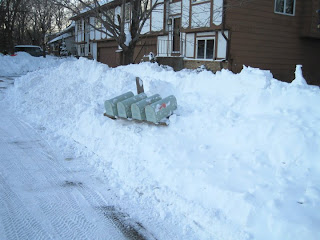 During the storm, our mailboxes were not the only news to us. The plows had to stop plowing due to the heavy amounts of snow coming down, the mail stopped running (yeah, never thought I'd see that happen but when the plows aren't clearing the roads, you can't do much), the buses for public transit stopped running, and the Metrodome roof decided that it had had enough of life in general.

It was nasty. And I still stuck around. (If Mother Nature is a sadist, I guess I am a masochist.)

So as you can imagine, I was nervous about my fourth winter (2011-2012) when it was drawing near. Turns out, it was the mildest winter this part of Minnesota had had in YEARS. I think we got a total of 20-22 inches for the entire winter. It fell less than 2 inches at a time (driveway plow company only shows up for 2 inches or more) and since the temps were milder, the snow always melted within a day or two.

Christmas was brown, not white.
And most of us were overjoyed by it all.
Plus, by March, we were seeing temps in the 70's.

But of course, it did cause a problem and I guess we do need the snow. (I hate admitting that.) Without enough snow in winter added to the dry summer, we had drought conditions. Little ponds were drying up left and right and the rivers were sooo low.

Which brings us to this winter and the pictures at the beginning of this post.

I was okay back in February when we had about 45+ inches for the winter. Especially when I realized that March was just around the corner. (March can be snowy but April comes in and usually helps me ease out of my winter funk.)

I have contemplated running away numerous times in the last few days and I wish that could. Normally, we head south every April to see my family but this year we decided to stay home. (We drove down to Tennessee in October, November, and December last year so we needed a traveling break. Or so I thought.)

'Foul mood' doesn't begin to cover how I feel.
I miss the sun. I miss being able to slip on my sandals and go sit outside and watch the clouds float through the blue sky.
I miss seeing my bare feet. (When you wear thick socks for months and only see your toes in the shower, you sort of let pedicures slide and then you have stark white feet with overgrown cuticles and nails that look like claws.)

I also miss riding my bike and washing my car. (Hand washing. Because only then will there be a gleaming car with no water spots.) And I miss playing tennis at the park with my husband while the kids volunteer to be balls girls.

We (the entire family) are more than ready to get back outside, without the threat of frostbite. We are beyond ready for what little spring we have left and then summer.

It's going to happen.