I cannot remember the last time I shopped in an Abercrombie and Fitch store. I do remember that I couldn't hear shit due to the LOUD music pumping through the speakers. And I do remember noticing that they were sizing their clothes down.

After what I read earlier today, I'm glad that I stopped giving that store my money.
And this is not the first time the CEO, Mike Jeffries, has come out and bashed bigger people.

He refuses to sell clothing larger than a size 10 for females. And his '10' is more like a 6 or 8 last time I checked. And if you want a shirt larger than a Large? Sorry. No dice.
(Even though, have you seen some of the teenage girls walking around? They have bigger racks, naturally, than most of their own mothers.)

Just out of curiosity... have you seen the CEO, Mike Jeffries? 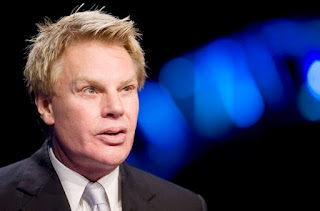 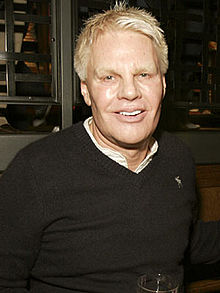 See, I am one of the last people to make fun of someone for how they look or their size. But this guy? I just cannot contain my disgust.

He looks as far from a 'cool kid' as you can get.

And he's an openly gay man. He should know better than most about how hard it is to get through life when you are in a group that is perpetually bashed for being different.

I told my husband about this right after I read the article... after I had calmed down enough to speak.
My husband made an observation that was sort of scary but dead on.

Hitler hated who he was. He hated everything about himself and chose to persecute those that shared those same qualities with him.

How is Mike Jeffries any different?
I doubt very much he was the 'cool kid' and he's not really a model size. And since he actually was married in the 70's to a woman, he obviously hid his true self until it was okay for him to come out. I imagine he spent a good part of his life unhappy and trying to 'fit in'.
And yet he chooses to say what he does and run his company in a way that makes most people cringe.

Not to mention, people like him are what drive young girls to have eating disorders. They so badly want to 'fit it' and be like their classmates who wear A&F. They end up purging their food or just not eating so that they can fit into those tiny doll clothes.

People like this man make me ill. It is sad and irritating to watch someone like this rake in tons of money, hobnob with the rich, fly all over the world, and have an influence on teens yet be such a downright disgusting person.

Button does own 2 shirts from A&F Kids. We bought them over a year ago in a mad dash to find something green for her to wear for St. Patrick's Day. But they never fit her right since she's a shrimpie. And at the time, she had a little gut action going on.
According to Mike Jeffries, she wouldn't be one of the kids that he would want to be wearing his clothing.

And when we toss them tomorrow, we will tell Button WHY we are tossing them.
I bet money that she gets sad first and then says that she wants to punch the guy in the neck by the end of the explanation. Especially since I couldn't possibly wear anything from that store. By this man's definition, I am fat and not cool enough to wear those clothes. 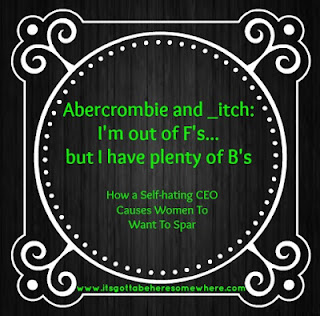