I Will Now Support Your Competition


Commercials.
They can be quite entertaining.
They can also be annoying as hell.

And just like anything else in this world, people have different opinions.
What is entertaining to one is annoying to another.
And vice versa.

Some commercials end up being great because I might find a new song/artist featured that I had never previously encountered. (An old T-Mobile commercial brought me The Hives and the Internet Explorer commercials introduced me to Alex Clare. I don't care about either product/company but I liked the music.)

But some commercials make me stabby. (I'm looking at you, Axe Body Spray/Shampoo.)
And if they irritate me too much at all, I won't buy what they're trying to sell me.

First up: Activia
Seriously. I don't give a damn about your digestive system and I'm guessing I'm not alone in this thought. And the older commercials? Where the ladies taped themselves everyday? Come on. Who in the hell would really do that? And why would you think ANYONE, except maybe your doctor, would care about your bowel movements?

Second: ANY infomercial
I am AMAZED at the actors they find for these.
WHY must you make every day activities look sooooo hard?
I generally don't end up thinking 'wow, that task is pretty difficult and that product would save me so much time and energy. Must call now! '.
I end up thinking 'you're a dumbass if you seriously cannot manage to hang your clothes on a hanger without them falling off. Maybe stop swinging the hanger back and forth?'.

Third: He went to Jared!
I really don't care where he went. Those commercials just make me want to punch someone, ANYONE. I don't have a problem with the actual stores but I just.can't.handle.the.ads. At all.
I refuse to set foot in one of their stores because of the commercials.
When my husband and kids were shopping for beads for my Pandora bracelet, he refused to go to Jared.

Five: Quilted Northern
No. No, it is NOT time to get real about what happens in the bahthroom. (You know you just said that EXACTLY the way she does in the commercial.)
Bathroom time, as we have told our kids, is private time.
And the rest of it.... like it's a NEW idea to feel clean?
It's a new and unheard of idea that feeling clean is sooo important?
And it's amusing to me that they never say 'poop', 'pee', or anything else that would make it more 'real' about what happens in the bahthroom.


Is it any wonder why I refuse to watch anything live?
If I cannot watch it on the DVR, I just don't watch it. 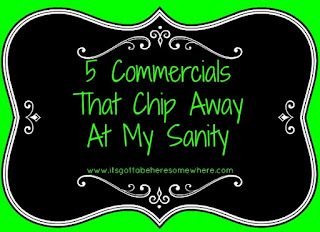