And There Goes My Lunch


I have never claimed to be 'normal'.

So, if any of this makes you think of me as slightly 'off', I really can't do anything about it. Hell, I KNOW that I'm slightly 'off'.

There are things in this world that make me want to wretch... or punch someone.
Sort of like how some people have a problem with the word 'moist'. (Dead Like Me cracked me up with a story about that. The mom couldn't STAND that word.)

While that word doesn't bother me, other things do.

For starters, I cannot stand watching people eat (in person and on TV.)

*Shudders*
And it's so much worse when it's a commercial for anything chocolate.
Seriously, it looks like a mouth full of sh*t.

And while we are on the mouth subject, I cannot handle seeing blog posts about lip gloss and/or lipstick swatching. It makes me want to gag. Seeing the shade on YOU doesn't help me see if it'll be the right shade for me. So, you're just making me feel ill.

I have no idea where this intense hatred came from about lips/mouths.
Like I said, I never claimed to be 'normal'.


Oh, and another thing about lips and TV/movies!
Do they stick microphones IN their mouths when the actors kiss?
The sound sends me diving for the remote to mute it as quickly as possible.
In real life, I have NEVER heard the smacking lip and mouth noises that loud.

It's like listening to kids play with Gak in a plastic cup.

It seriously sounds like they are trying to suck their faces off. I start thinking I am watching Aliens. But then, I actually enjoyed that movie.

I guess the next step for the cameras is to be in the esophagus and record the inner workings of the noises that mouths make. 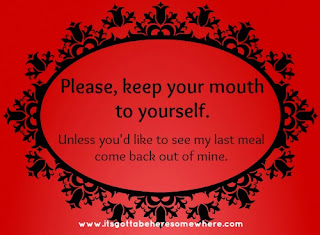