Yesterday was Button's 10th birthday. And it was a great day, overall.

The weather was icky from the moment she woke up but she said that she wasn't going to let that bother her. (Thankfully, we managed to avoid that snow that slammed into Rochester.)

After school, we picked her up while Peanut stayed in the after school program until we were done getting Button's gift.

We asked her on the way there if she had any idea what her gift was going to be and she guessed the yo-yo. Now, my response was NOT a lie. I said, "just because you ask for something, it doesn't always mean that you'll get it". I wanted to make her forget all about that.

When we told her that we were going to get her ears pierced, she lit up like a tree at Christmas. But then a second later, she said, "wait... is it going to hurt?". (She's sort of a wuss when it comes to any sort of pain. She's the kind of kid to show you her paper cut... 3 weeks after it healed.)

We told her that it would hurt less than last summer when she wiped out in the driveway on her bike and tore skin from her elbow and knee.

Walking through the mall, she gave us another quote to add to my ever growing list of Kid Quotes.

"I really am a big girl now. I got new socks, I'm hitting growth spurts again, I'm getting my ears pierced. And I'm 10!"

I love that the 'new socks' made it in there. Do all kids get that excited by new socks?

She got her ears pierced and only slightly looked like she might die from the immense pain. And then right after, she had to sit because she said she wasn't feeling great. But after a few minutes, she was good to go. (And she perked up lightning fast when I told her that I could MAKE her some earrings for Christmas.)

After that, we headed over to the Cheesecake Factory, big surprise. (If you ever go but have a problem with the HUGE portions and high prices, go before 5. As long as you place an order before 5pm, you can get the lunch portions which are smaller and cheaper.)

Here's Button being a happy, happy girl waiting for her food and showing off her ears: 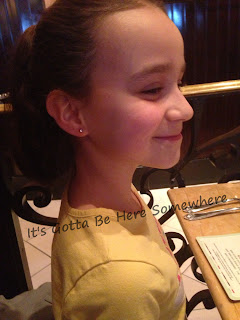 After dinner, we headed home to have cupcakes and for Button to open the cards from the grandmothers. (She had no idea she had a gift from us.)

One of these days, I am going to sit down and figure out how to take better pictures using the manual settings. I am slowly working on it.


After she opened her cards, we gave her what she really wanted:

Seriously, are kids usually that happy with a yo-yo? I hope she remains this easily pleased as she continues to grow up.