I read a lot of blogs. And almost all of them are written by other moms, most with multiple kids.
Hats off and awards to those I read that have 4+ kids. Yikes. How do you do it??

And when I read these posts, I always end up thinking to myself, "something is wrong with my kids".

Please, don't shoot me for what I am about to write.
I know it will sound strange to some and like outright lies to others.
I am not posting it to brag or make any other mom feel inferior.
I can assure you, I'm just as weirded out as you might be. They freak me out at times.
And I live with it, every single day.

1) My kids aren't picky with food.
Button used to be picky but somehow, we broke that behavior.
And no, it wasn't easy.
The kid wouldn't eat a lot of stuff, including PB&J.
But we kept at her and eventually, maybe due to the fact that Peanut will eat almost anything, she caved and started eating the way we preferred.
They both eat salmon, grilled or baked chicken, couscous, squash, zucchini, broccoli, carrots, apples, all fruits (although Button doesn't really like blueberries), and wheat bread. They eat a lot more than that but for the sake of your reading time, we will end the list there.

Button has even gotten to where she will repeatedly try a food, although she might still hate it.
(Example: It took me a few years of variations before I finally got my cornbread dressing to taste the way I wanted it to... like my grandmother used to make. But each time, Button did try it. She didn't like it and told me so. But she kept at it. When I finally got the damn recipe perfect, she told me she loved it.
Deviled eggs are a different story. She tries them every single year. And every single year, she hates them. Maybe that will change when she's older?)

2) My kids don't throw tantrums in public.
Yes, Peanut did throw a few at school but it usually had to do with her not expressing anger in a better way, which she has finally learned to do.

Each kid has thrown ONE tantrum each while in public:
Button did it before I knew her, in Target. According to my husband, she sat her chunky 2 1/2 year old butt down in an aisle and proceeded to raise hell. My husband and her bio mom walked away, around the corner so she couldn't see them. Within 20 seconds, she stopped crying and got up to find them.
She has never done it again.

Peanut did it after I moved here. We were at Cub grocery shopping and she spotted bananas in the buggy. (Please, I am from the south. I have never called them carts and I never will. Chalk it up to a southern thang and move along.) Peanut wanted a banana. She wanted it right then and there. She was not listening to the reasoning behind not giving it to her. She didn't care that it had to be weighed and paid for before consuming. She.Just.Wanted.It.
She threw one hell of a fit.
Good lord. It was awful. From produce all the way to frozen goods, she wailed. She kicked her legs. She made me wonder what in the hell I had gotten myself into moving in with 2 kids.
An elderly lady smiled at me and told me not to worry, it happened to every mom. I informed her it was over a banana and she looked bewildered.
My husband finally took her outside at checkout while Button and I stayed inside.

Happy as hell to say that the child has NEVER done it again.

3) My kids don't get up at the butt crack of dawn.
Not anymore, at least.

When I first moved here, they got up on their own by 6:30 am, an ungodly hour to me, a lifelong night owl. They were loud because they couldn't be bothered to think that other people in the house might want to sleep in. They were hungry. They were bored. They wanted to go outside.
Meanwhile, I once again pondered what I had gotten myself into.

We managed to break that habit.
No, it wasn't overnight.
No, it sure as hell wasn't easy.
Yes, I was almost committed during said habit breaking.

A few years later, we can get them to stay in bed until someone comes to get them up.
There have been times that they've stayed in bed, asleep, until noon. (Told you, night owls.)

4) My kids don't fight with each other.
Yeah, they are totally aliens. I know tons of siblings that cannot get through one day without bickering or hurting each other. My own nieces have left scars on each other with fingernails.

But my kids don't do that.
Sure, Peanut and her temper used to wail on Button occasionally.
Peanut would be 'done' playing with her sister and expected to Button to read her mind. When Button didn't get the hint magically, Peanut would smack her with  Magna-Doodle. Or bite her. Or smack her. Or kick her.
Button never once retaliated. Instead, she curled into a ball and started to cry.
She never stood up for herself, which most big sisters will do.
(Yes, she was/is a bit of a doormat. We are working on it.)

Peanut stopped physically hurting Button when she was around 4, so in the last 3 years, there's been not a hint of physical violence.
And you will rarely hear either kid tell the other one off for being annoying.
I think I'd prefer they fight.
Some of you just spit out your drink, right? You're thinking, 'what the hell is wrong with you? Do you realize how good you have it?'.
Bear with me here while I explain.

The problem? Button doesn't express anything but happy and sad.
Any other time, she clams up and lives in her head.
She has allowed other people to hurt her for years and never expressed the emotion you'd think she'd express. (In 1st grade, her 'friend' would find her every single day on the playground and step on her fingers. Every day. And not once did Button get angry. Hell, she still called this kid her friend!)

And she's missing anger totally. No, I have never once seen this kid angry.
All of those times that Peanut was mean to her, broke her toys, made her feel bad... never once did she get angry. I am starting to think that she's not capable of  feeling that emotion.
And that worries me. At times, it's easier to deal and move past anger. Sadness has a way of staying in your heart and head forever. In my experience, being sad all of the time makes you feel worse whereas feeling anger can help you to deal with things and not appear to be a doormat.

Personal experience: I was a doormat in junior high and high school. I cried a lot due to the constant bullying bestowed upon me by the majority of my grade. I never stood up for myself. I retreated inside my own head and ended up miserable.

A few years after high school, I ran into a guy from my school. He ended up calling me a bitch at some point, although I cannot remember why or how it came up. It bothered me.
So I asked my BFF at the time, a guy I'd known a few years, closest thing to a brother I will ever have, if I was in fact a bitch.
His reply: 'You can be, when you feel threatened or wronged. But when I first met you, you were a doormat and people hurt you constantly. I'd much rather you be a bitch when needed than watch people walk all over you.'

I would much rather have my girls be strong and stand up for themselves than be cowering in a corner crying over any little thing that goes wrong.

Yep, my kids are strange.
And let's face it... numbers 1, 2, & 3 really don't bother me at all.
But number 4 keeps me awake some nights, depending on what happened that day.
I worry about my girls and am trying to help them find the balance needed to deal with the plethora of emotions that they will most likely encounter in their lives. 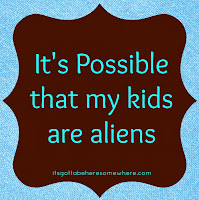 How about you? Do your kids do something that makes most other moms stare at you in disbelief?