Trip through a forest and then into a zoo

Yesterday, Button had an event in the morning at a park in the Twin Cities.
Since Peanut did not have a the same event, we planned to walk around said park and take pictures of little one so that I can learn how to get my camera into Manual mode and leave it there.

But it was raining.
We sat in the car wondering what in the hell to do for the next TWO HOURS.
I had my husband search for the nearest Payless so that I could get ballet shoes for Halloween that will make my little Peanut the cutest little butterfly fairy ever.
Luckily, said Payless was less than 20 minutes away.
Yeah, that killed less than an hour.

Did I mention I was tired?
I didn't have a chance to work out before we left so I was half asleep.
No time to make coffee either since I rolled out of bed, sprinted to get clothes on, and then lef the house hoping traffic didn't suck.

We drove around for what seemed like days but in reality, it was maybe half an hour.
When we got back to the park, we still had half an hour to go before the class let out.
LUCKILY, it has stopped raining.
So my husband and I took Peanut on a walk in the forest.
Said forest was really nice. Great park.
And I imagine it'll be even more beautiful next month when the leaves are changing.

On the path, I spotted this off to the side and Peanut was giddy with glee: 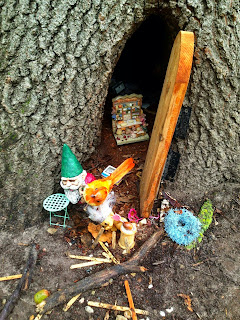 I'm gonna go out on a limb and say that the park officials did this.
(Funnily enough, Button walked the same path more than once and never saw it. Nope, being observant isn't her strong suit.)

Finally Button was ready to go.
We stopped at Sonic to chow down before heading over to the Como Zoo for the next class, which both kids were attending. Luckily, it was a drop-off event so my husband and I had some alone, grown up time. We hit up a bead store in St. Paul that I had been wanting to check out. It took 7 minutes to get there and 7 to get back. Yeah, we had some time to kill.

So, we walked around the zoo.
It was the first time that I had been to the zoo at Como (I attended a wedding in the conservatory a couple of years ago). And since it was Wednesday, midday, there wasn't a crowd. (4 buses of kids on a field trip were leaving just as we pulled back in, thank god.)

But with less crowds, there was less to eat.
And by less, I mean nothing was open.
Which I hated. Cause going to the zoo means eating some junk food, right?

I got to see the animals and it was decent weather, although the humidity left by the rain made me and the girls look like we had Chia hair.
We collected the girls after the class and hit up the gift shop. (We buy them pencils and a shirt for every place they go, like zoos, aquariums, and touristy places.)

We hit hella rush hour traffic on 94 trying to get back to the other side of town. (I don't see how people drive that stretch everyday. I'd go postal. I was bad enough when I had classes at St. Thomas and had to drive thru it a few days a week.)
By the time we got home, I was ready to go to sleep before dinner.
But we still had math to do and some spelling/writing.
I think I made it to 11 something and then totally crashed.

It was a fun but exhausting day.
The kids had fun and I got to see penguins: 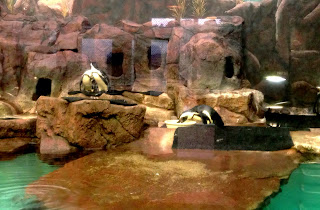