The 10 films you should have already seen

These days, we have so many ways to watch movies.
Gone are the days that you had to go into a Blockbuster and then deal with a huge late fee penalty when you inevitably forget to return the VHS on time. (Don't act like you don't know about the late fees.)
Gone are the days that all of the new releases were out of stock at Blockbuster and you had to wait until someone finally got tired of racking up a late fee and returned the tape.

So with all of those options, some of them free (especially older movies), why haven't you put more effort into seeing these classic films?

1) Real Genius - 1985
When I first met my husband, I almost had a heart attack and died when he told me that he'd never seen this movie. I had to educate him.
Geniuses in college trying to score with chicks make a laser that can vaporize a human target from space. It's awesome. And it stars Val Kilmer.
And the end song is by Tears for Fears. Score!

2 ) The Wraith - 1986
A desert town run by car enthusiasts/gang is rocked by a futuristic car that no one has ever seen before. Soon, the gang's numbers are dwindling and it's getting mighty eerie. Love the 80's rock music in this one, especially Ozzy.
Charlie Sheen before he was 'winning'. Sherilyn Finn before "Twin Peaks".
And Randy Quaid during his time as 'Cousin Eddie'.

3) How I Got Into College - 1989
Marlon Brown and Jessica Kailo go through the hell that is getting into the college of your dreams. (Or for Marlon, getting into the college of his dream girl's dreams.)
Lara Flynn Boyle before we started seeing those pics of her sickly skinny body.
Anthony Edwards, after Revenge of the Nerds but before "E.R".
Tichina Arnold before she starred in "Martin" and "Everybody Hates Chris"

4) Gleaming the Cube - 1989
Come on, it's Christian Slater right after he tried to blow up Westerburg High with Winona Ryder in Heathers. It's about skateboarding, family, and making things right. TONY HAWK IS IN IT AND DRIVING A PIZZA HUT TRUCK!

5) Welcome Home, Roxy Carmichael - 1990
Veronica Sawyer becomes outcast Dinky Bossetti and we feel for her. She just wants to be left alone and figure out if she was abandoned years ago by a teenage girl that her town worships all these years later. Featuring Jeff Daniels, Francis Fisher, and Needle Nose Ned!

6) Singles - 1992
I adore this movie. 20 somethings in Seattle trying to figure out life and love with a kick-ass soundtrack.
Kyra Sedgwick before she was kicking ass as "The Closer". Matt Dillon, Bridget Fonda, Bill Pullman, Jeremy Piven, and Campbell Scott with members of Pearl Jam, Alice in Chains, and Soundgarden making appearances. How can you get better than that in one movie?

7) Indian Summer- 1993
Imagine going back to camp 20-30 years later and having nostalgia wash over you like a tsunami. 7 friends from the golden age of Camp Tamakwa are invited back by their old camp director, Uncle Lou. Each person is dealing with old ghosts and current life problems.
Diane Lane, Bill Paxton, Elizabeth Perkins, Julie Warner, and Kimberly Williams right after she captures our hearts in Father of the Bride.

8) Home for the Holidays - 1995
Claudia is going home for Thanksgiving after getting fired, making out with her boss, and worrying her daughter will give up her virginity. If you think your family is dysfunctional, you need to watch this. It could make you feel better.
Holly Hunter, Robert Downey Jr., Anne Bancroft, Steve Guttenberg, Dylan McDermott, and Claire Danes after she made us all feel better about teenage angst as Angela on "My So-Called Life".

9) Hackers - 1995
Curiosity was their only crime.
This movie starred Angelina Jolie before we knew who Angelina Jolie was, before we knew what hackers could actually do with computers.
Plus, it stars my man Jonny Lee Miller, the star of one of my favorites shows on CBS, "Elementary".
And even though I usually hate techno, it has a kick-ass soundtrack.

10) Mother - 1996
I love Albert Brooks, as a writer and actor. And the Mother in this is Debbie Reynolds, whom you might recall was Grace Adler's mother in "Will & Grace".
Anyone that has ever had a problem communicating with their own mother should really identify with this film. The sense of humor is dry, the way that I like it.


What are you waiting for? Go download and get to watchin'! 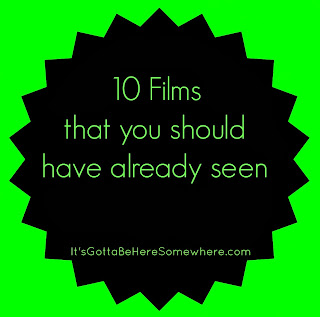 Labels: nostalgia, What I Love