Winter is never going to end

Warning: born and raised southerner living through a hellish winter in Minnesota needs to vent. So if my bitching bothers you, you might want to skip the post today.

It's February, which astounds me. Where in the hell did January go? I swear, just yesterday it was New Years Eve.

It's been 2 looong months of winter here in Minnesota. A long, dark, frigid winter. And I am so damn sick of it. I am tired of wearing double layers and still freezing my ass off.
And don't even get me started on the amount of shoveling that we have had to do this winter. With our own house plus Hell House, it's a lot of shoveling. (Go take a look at the last pic in the previously linked post. That is a long sidewalk when it's covered in snow. That's not counting the driveway and the front sidewalk.)

Friday we ended up having to shovel our driveway for almost an hour, thanks to the amount of blowing snow that had accumulated near the house. And then the next day, we spent another hour shoveling Hell House, again thanks to blowing snow. (I swear, both houses are in wind tunnels.)
The front steps at Hell House were totally under snow... couldn't see where they stopped or started. Stepping in it, the snow came up above our knees. We had to shovel that walk to even get IN the house.

When I look outside and see this, I can feel my day go from decent to shitty. I see shoveling in my future. And shoveling sucks. 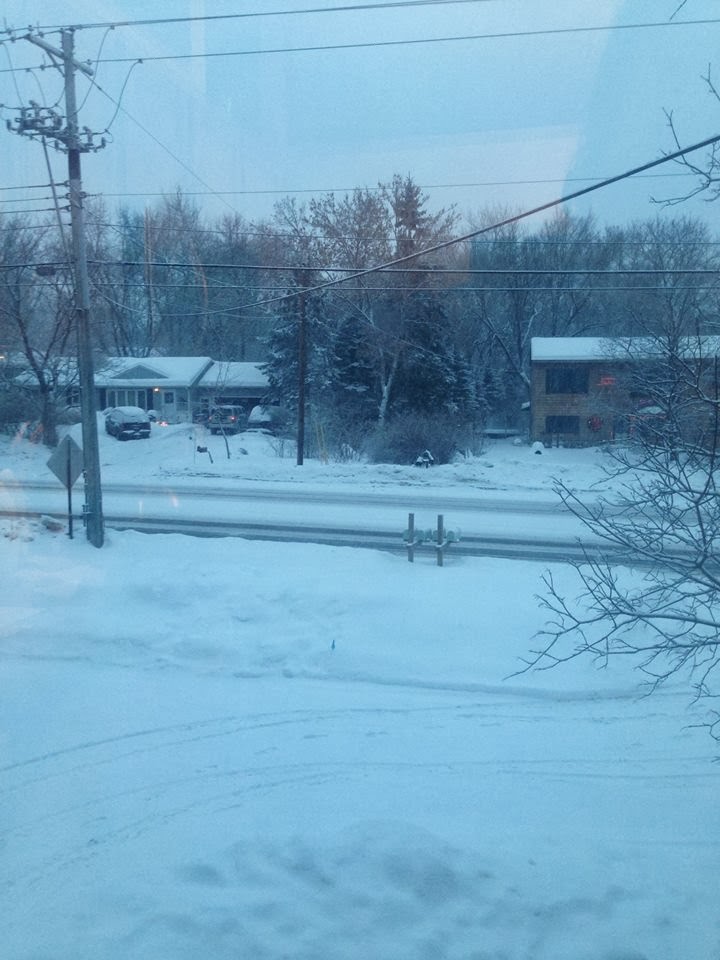 We've been having a lot of days like this: 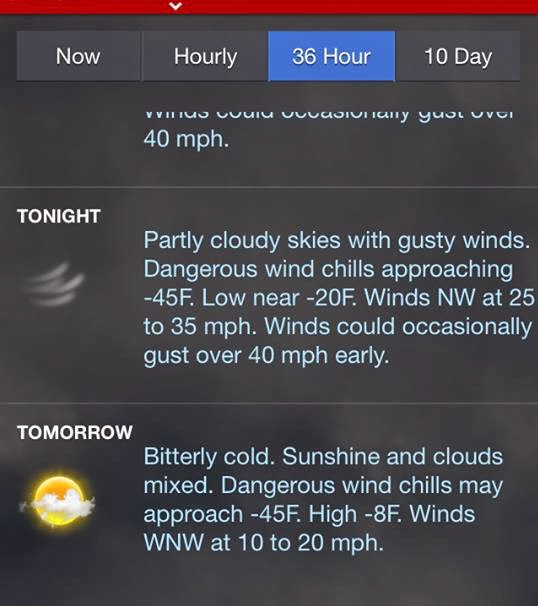 And days like those make me sleep longer, sort of like pretending I'm a bear and hibernating. Wake me up and you better be using a very long stick that keeps you more than an arms length away. Since the temps and wind chills have hovered near frostbite and hypothermia levels, you can't even go out with the kids and play in the snow without worrying about medical problems. Boo.

I generally wear 2 pairs of socks at a time. My hands and my feet stay cold, even in the summer. But even with 2 pairs of socks and a thick pair of boots, I am still worrying about frostbite. The pain I sometimes feel in my toes is enough to make me get in my car and drive south.... never to return.

Every day, I wear thermal bottoms under sweatpants. (Shursh. I'm renovating a house, for gods sake. I doubt be on the cutting edge of fashion is necessary. And if you've read this post, you know I don't bow to the pressures of fashion or society.) Those thermals and the sweatpants still leave me shivering.

I did wear jeans on Peanut's birthday and 5 minutes away from the house, I was raising hell and regretting that decision. (See? I do dress nicer when I feel that I need to do so. I even wore a nice shirt, makeup, and perfume!)

And don't even get me started on my car.
My mother keeps saying that her car is dirty. Puh-lease, woman. Does you car look like this? 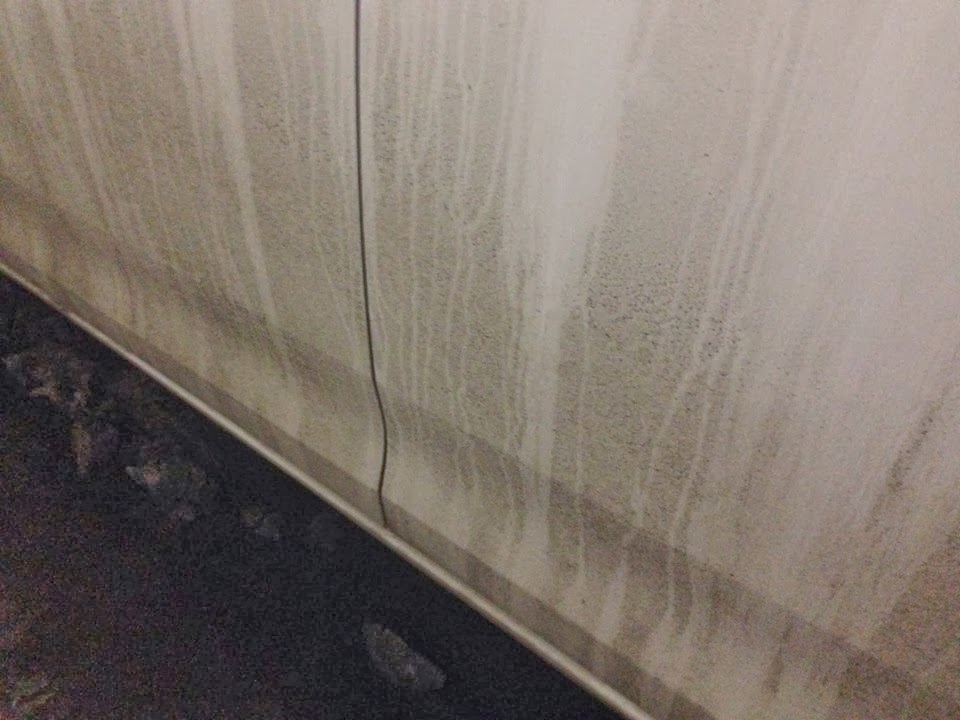 And this is AFTER I was able to wash it a few weeks ago. The stripes are due to the snow that hit a week ago on our way home from Hell House and dinner. It was warmer that day so the snow was wet on the car and not freezing right away. The top half of the car is a little cleaner than the bottom. (Check out the bottom of the pic. That's my garage floor, or what I call nasty as hell. It's covered with snow turds, salt, sand, and dirt. Yuuummy.)

With snow and terrible temps in between days of warming comes two things that I cannot ignore when I pass through neighborhoods: ice.
Icicles and ice dams are plentiful around the Twin Cities right now.
And until moving here, I never paid much attention to either. Now I realize how bad it is to have ice dams on the sides of your house. And I'm amazed that more people don't properly deal with them. If you don't. you'll end up over the years with lots of damage to the inside and outside of your home.

A house near Hell House doesn't have an ice dam... it has an ice DAMN! 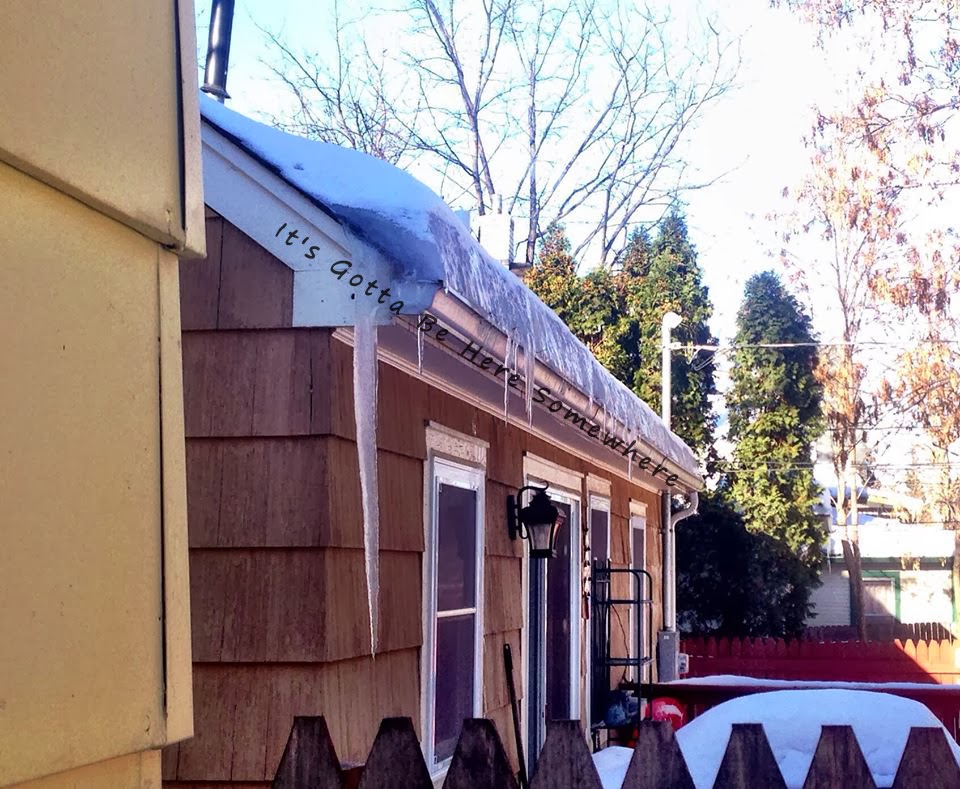 That's a good 6-8 inches of solid ice hanging at the edge of that house, plus the long, sharp icicle near the side. LOTS of houses look like this right now and I cringe at the damage that it's causing.

And speaking of icicles... this one I had to photograph. Sadly it's hard to tell in the picture (looked better and more visible in person) but it's got wavy lines in the ice. It made me think of bacon.
Ice bacon? 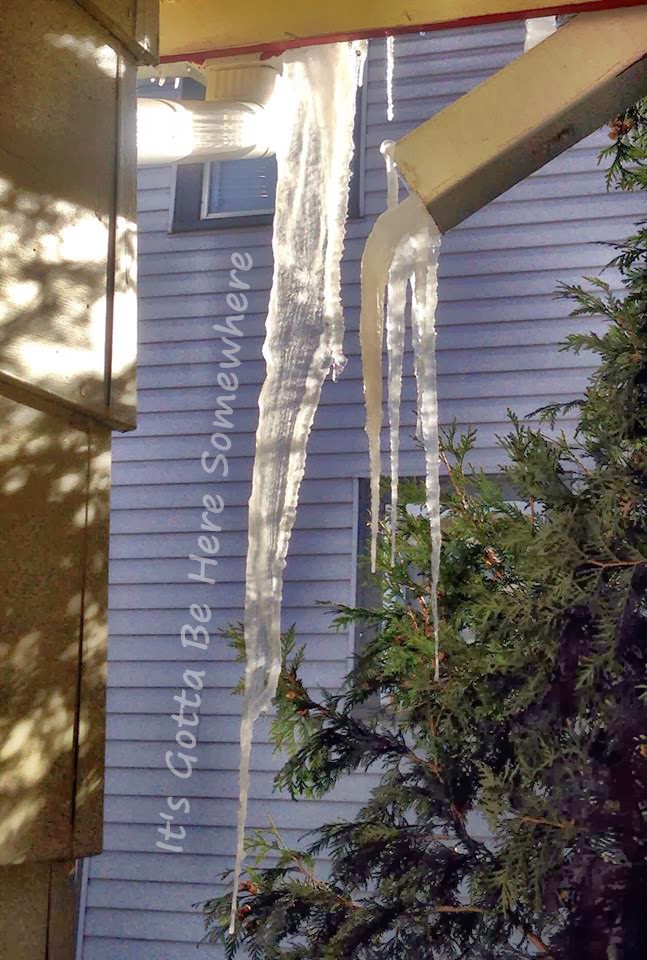 On Saturday, February 1, Peanut mentioned that January was over. And since it was February already that meant that winter in Minnesota was almost over. I stopped and looked at her with a puzzled expression. When she asked what was wrong I said, "You do remember that it snowed on Button's birthday last year, right? It snowed in May last year. Winter lasted about 7-8 months".

She thought about it for a second, frowned a little and replied, "I want to live closer to the equator". 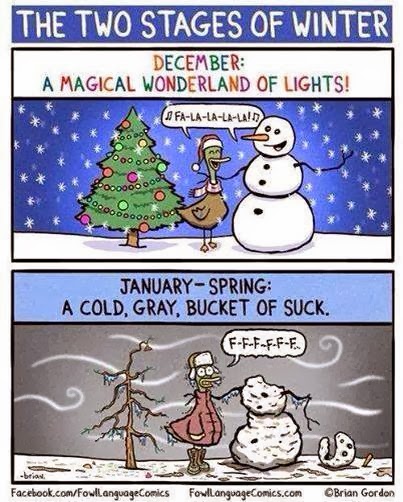