A couple of years ago, my husband and I purchased a falling down house with intentions to restore it and sell it. You know, flipping.

And for a little while, we were making progress. But then we hit a snag when building a loft bed for Button led to redoing our kitchen and floors. Yes, we made our home more livable before fixing up a house that we don't live in. It's the only reason I have any sanity left at this point.

Here we are two years later with the house from hell.

Last winter, we sort of didn't do much renovation over there. Okay, we barely went by the place at all. And now, we are paying for that... literally.

A pipe burst last winter and water went everywhere. Since the furnace flooded out, the water froze... all over. The living room was a sheet of ice. The walls did soak up some water but thankfully, the ice slowed the process. With a few machines to rid the house of the moisture, we were left with no water but a hell of a lot of clean-up.

We had to tear down every wall in the living room, all the walls and ceilings in one upstairs bedroom, and part of the kitchen ceiling. The furnace was replaced already and after a service call to the heating peeps and the gas company, the heat is working just fine.
(The heat was fine earlier in the year but this winter, there was a snag. We spent a few hours over there Monday and we damn near froze. No heat in Minnesota heading into winter. My toes were icicles and I was miserable.)

No, we aren't happy.
Yes, I felt like I was drowning when I saw the work ahead of us.
No, we will not give up.

It's sort of a blessing in disguise, if you look at it the right way.
The old walls were disfigured in some places (too many patch jobs over the last 96 years). At least once we are done, they will all match and look great, which equals more money when we finally get the house on the market.


And here's the beautiful kitchen! 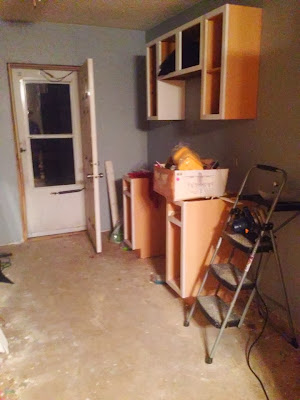 The one thing that I got done the other day before the temps bottomed out and the snow fell:


The Vine from Hell at Hell House: 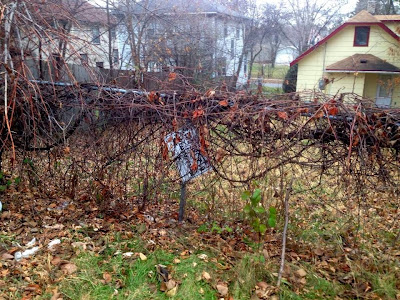 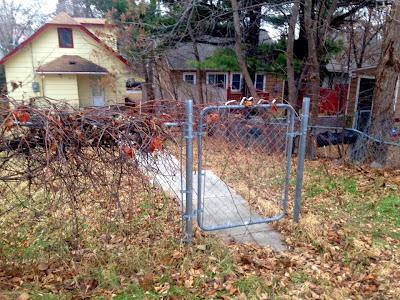 For over an hour, I clipped and cut and pulled and fought that damn thing. Button was awesome and collected the remnants and piled it all up for me, never complaining one time. She actually enjoyed it. (Although I'm pretty sure what she enjoyed was helping me, which makes me happy... and babbling while working.)

The Vine met it's death: 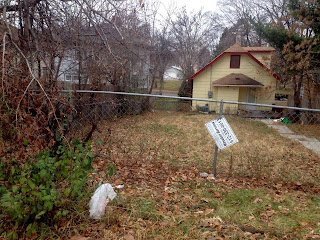 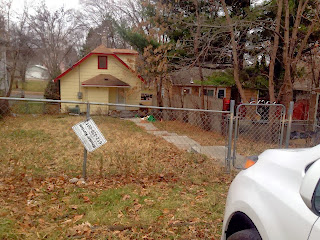 The Vine tried to kill the fence but the fence only ended up slightly wounded. With a little pulling and reshaping up top, the fence will live a longer life than The Vine intended. (And now that it's clear, we can get that damn sign off of it. No clue where that came from and when. It was on it when we bought the house.)

It's going to be a loooong winter. And the house will take a little while to fix, too.