In my last post, I shared with you the makings of my Halloween wreath and a few of our front porch pumpkins. The rest of the pumpkins are coming along nicely and the wreath is actually done.

Today, I have a few pics of the decor I found while perusing Hobby Lobby, Pier 1, and Jo-Ann. Since I've never really decorated for Halloween before, I had literally no Halloween decorations. Luckily, most of the stuff I found wasn't terribly expensive and can be used for years to come.

First up, our table by the front door: 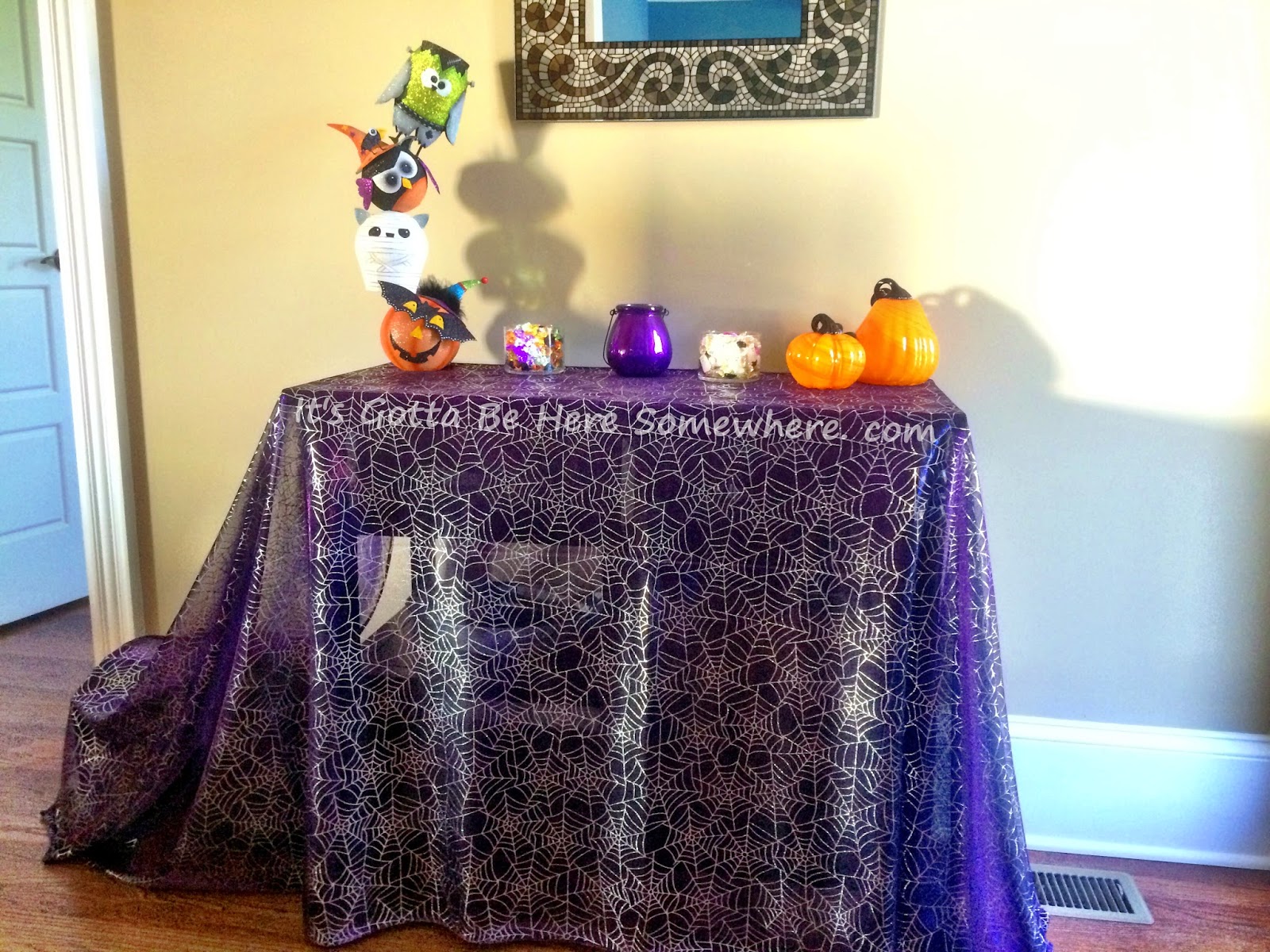 I found the fabric at Jo-Ann while my husband was looking for something to make the ghosts that he wants to hang from the tree in front of our house. I was standing there looking around and realized I was right in front of the Halloween fabrics. This one was buried behind 2 others but I saw it poking out. It's pretty enough in the photo above but it's what it looks like in person that made me grab the bolt and head straight to the counter.
It's purple, but it shifts to blue when held a certain way... just like a duo-chrome nail polish. And in certain lights, the spiderwebs disappear.


Below is a video that I shot of it outside so that if the explanation above
was confusing, the video would eliminate the need to imagine.

On the table are these guys: 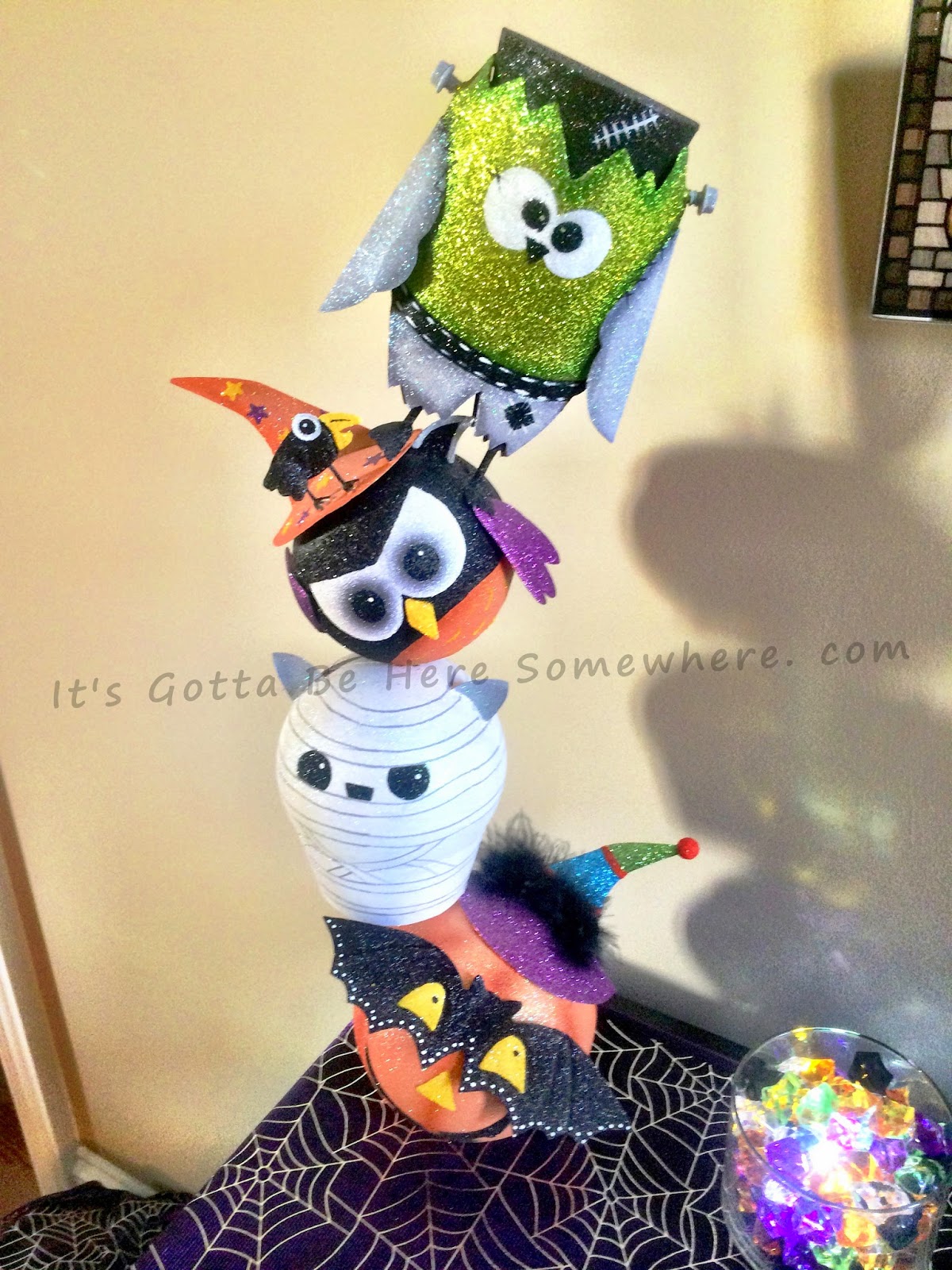 I found them on Pier 1's website and went searching for them in the closest store to me. Next to the totem, you can see a little glass of what looks like gems. I found the plastic gems at Hobby Lobby and had the idea to put them on an LED light in a glass container. (I also found some for Thanksgiving/Fall... pumpkins and acorns. You'll see them on the blog next month.)

These glass pumpkins are also from Pier 1: 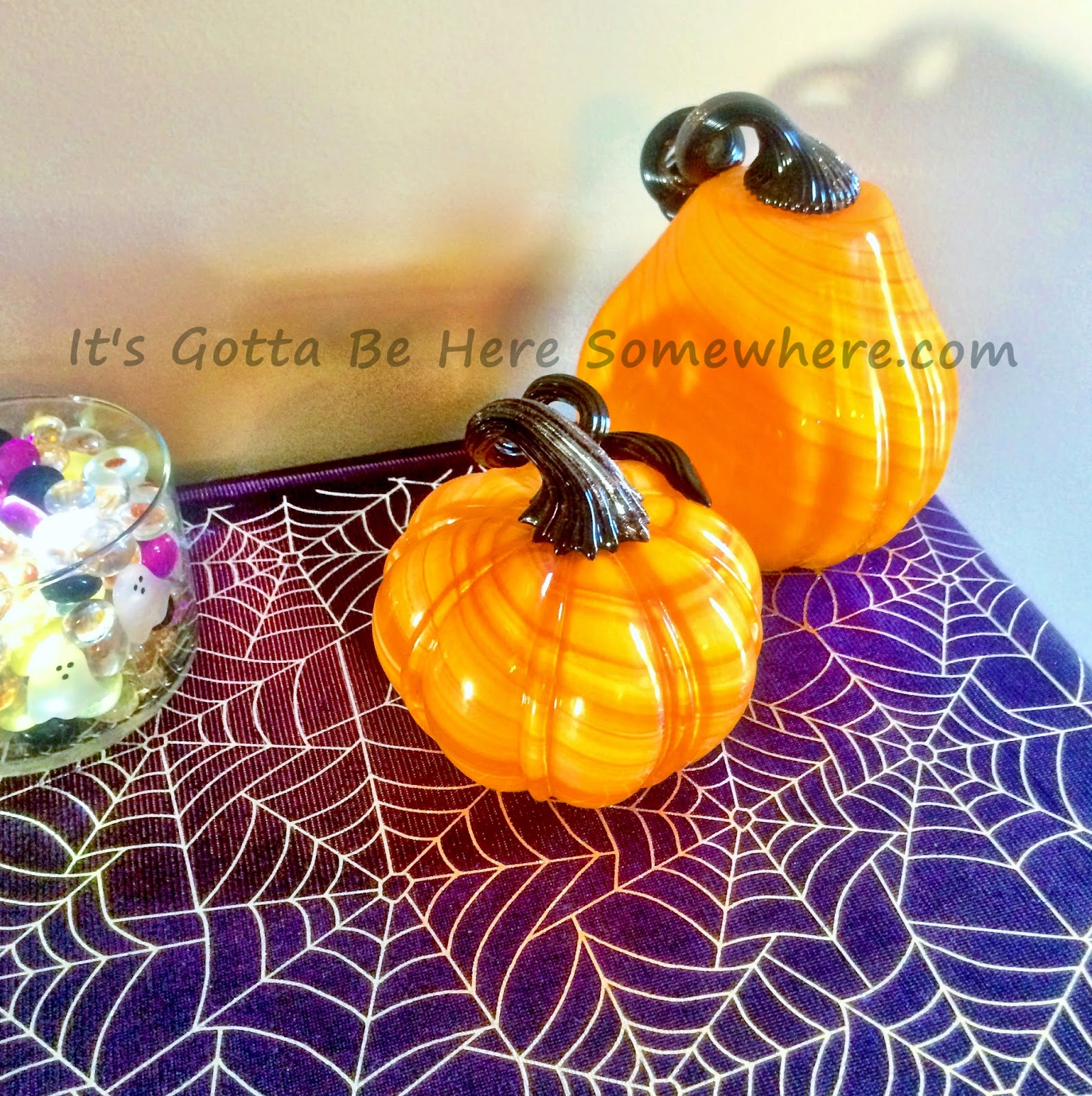 On the left in the photo above, you can see the other glass container that I filled with glass pebbles. Below is a photo I shot of it later at night so you could see it lit up more. 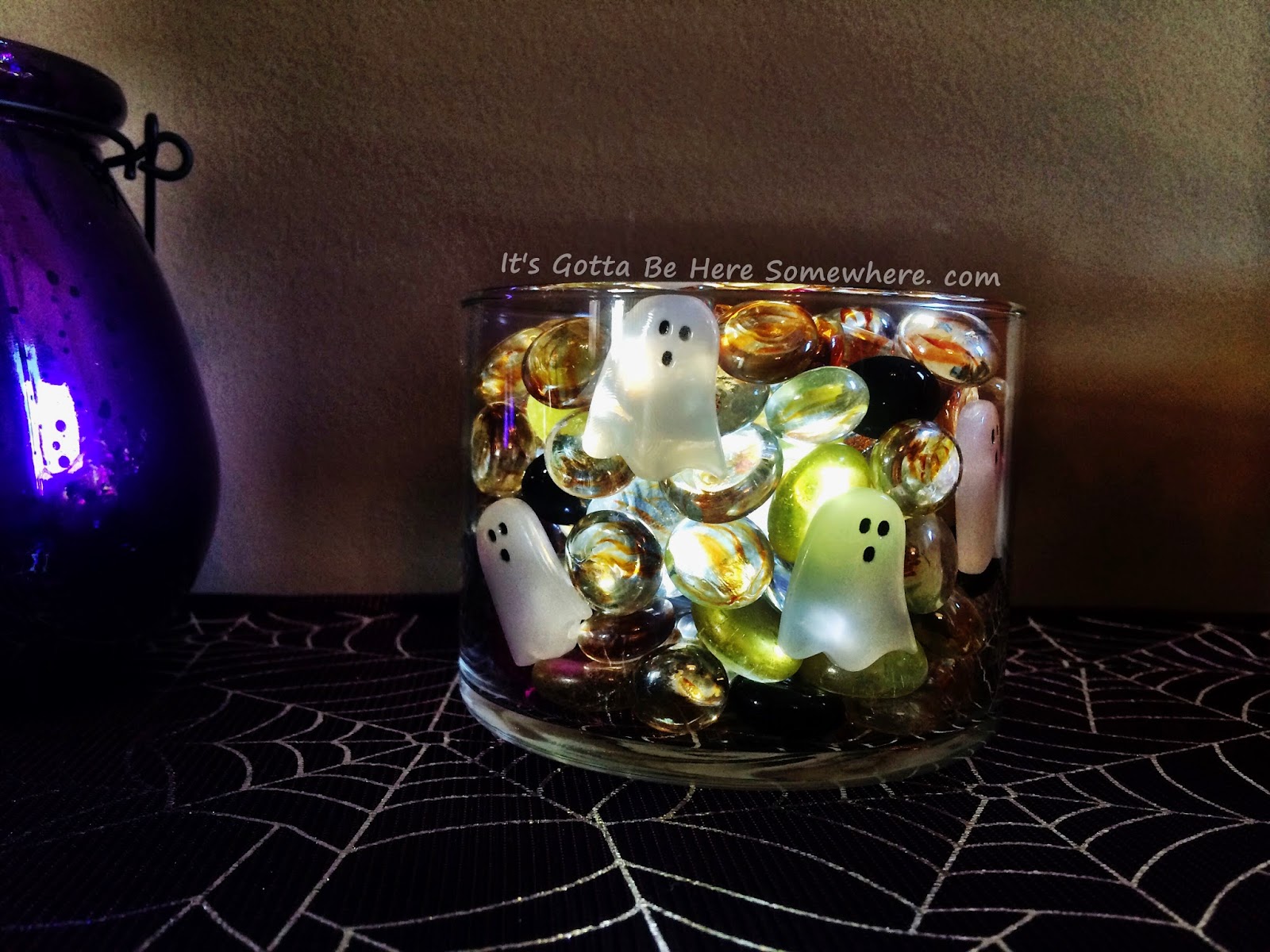 I found the pebble mixture, ghosts included, at Micheal's. I made sure to arrange them so that the kids could see the little ghost faces. I really like the end result and it was pretty inexpensive.

Besides finding the fabric at Jo-Ann, I found this cute little door hanger. It looks like a bushel of grapes, yes, but the orange ones are cut to look like Jack-o-lanterns and I loved it. 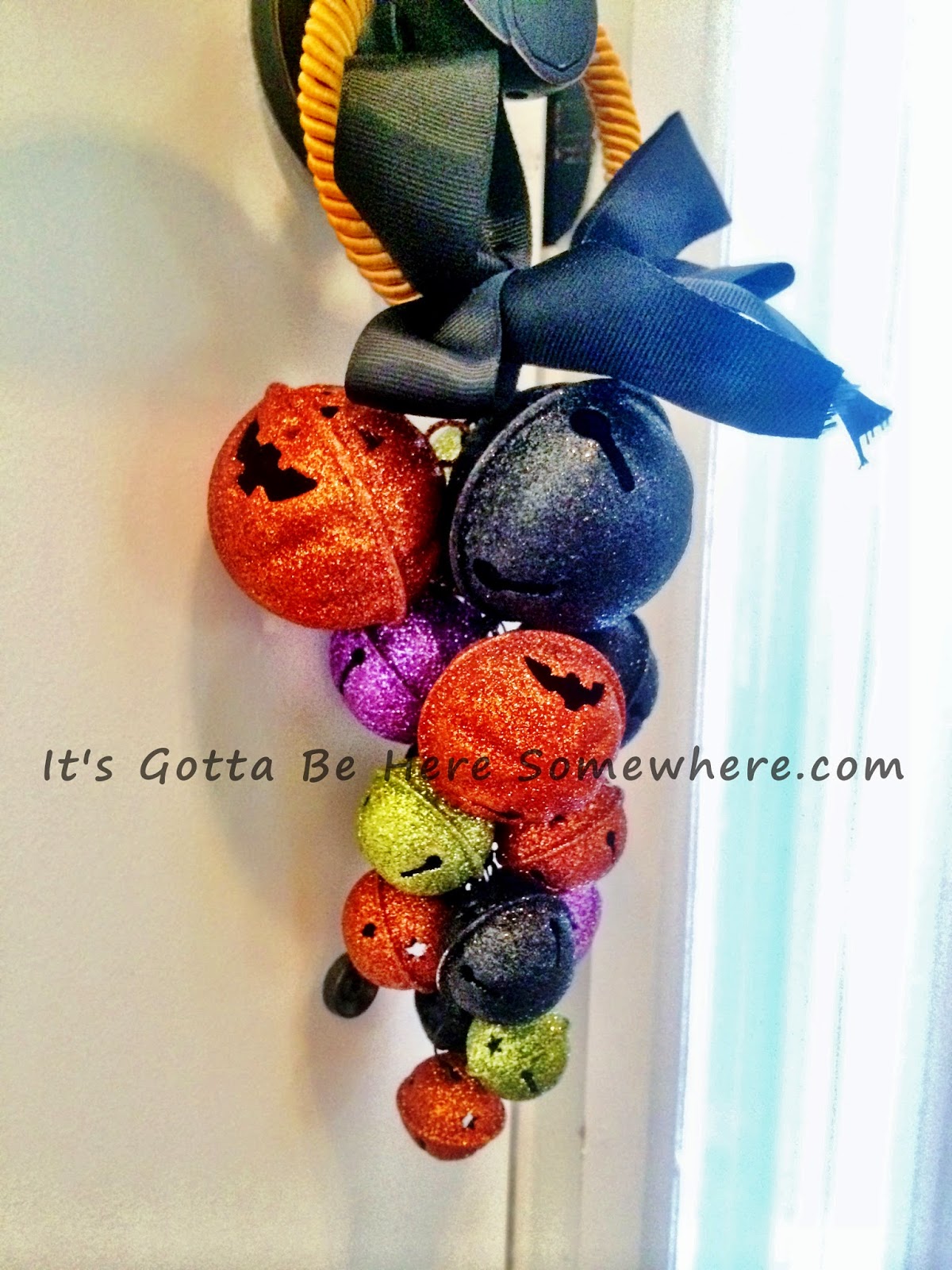 That's it for today! I'll have another post Monday with photos of my wreath and hopefully the garland (if I can get it painted and decorated by then).

Also, we are heading to a few fall festivals this weekend so hopefully I'll have some photos of hayrides, pumpkins, and corn mazes.


Have a great weekend!