New goodies in the Etsy shop!

Disclaimer: No polishes were harmed in the making of this jewelry.

After what seems like a lifetime and a half of trial, error, research, and development, I finally have some finished resin pendants in my Etsy shop, Travelin' Chick Designs.

A couple of years ago, I made nail polish and sold it on Etsy. My indie brand was Red Carpet Lacquer and I sold a few polishes. I made polishes inspired by television shows and movies. I got out of it because it was a lot of hassle, too many inconsistencies with supplies, and there are some crazy people in the nail polish community.

When we moved, we moved a few boxes of nail polish making supplies, including glitter and pigments. I wondered several times what in the world I was going to do with all of that glitter.

Last year, I bought my first resin supplies. And after it came in, my husband and I talked about experimenting with the resin and the glitter and maybe making nail polish jewelry. I ended up tossing that idea into the trash due to the fact that there were already a lot of people smearing nail polish on the back of a glass cabochon and gluing it into a bezel.

But then I thought... if I could get the glitter suspended in the resin and use pigments/dyes to sort of recreate my polishes from scratch, that would be cool.
And then we decided to move. And I had to pack. And then I had to unpack. And then we were busy all summer so the resin jewelry idea got pushed to the back of my mind.

A few months ago, I finally got started. And I had a lot of nights that I thought I'd find something else to make because resin? It's fussy. Suspending glitter? Fussy. Water marbling a specific color theme onto resin for kids in a specific school? FUSSY.

But I finally got it all figured out and I LOVE the results.
Below are a few of the pendants that are all done and listed in the shop.


'Grifter' was inspired by a character named Sophie on the TNT show, Leverage.
Black 'Grifter' resin pendant: In the sun, this is stunning. It's full of holographic silver glitter and domed with solid back to show off the glitter. When I made the 'Grifter' polish, I almost always wore it over black.  Photographing it is difficult because it just doesn't capture the sparkle.
The chain is 17 inches but can be adjusted to 19 inches long. 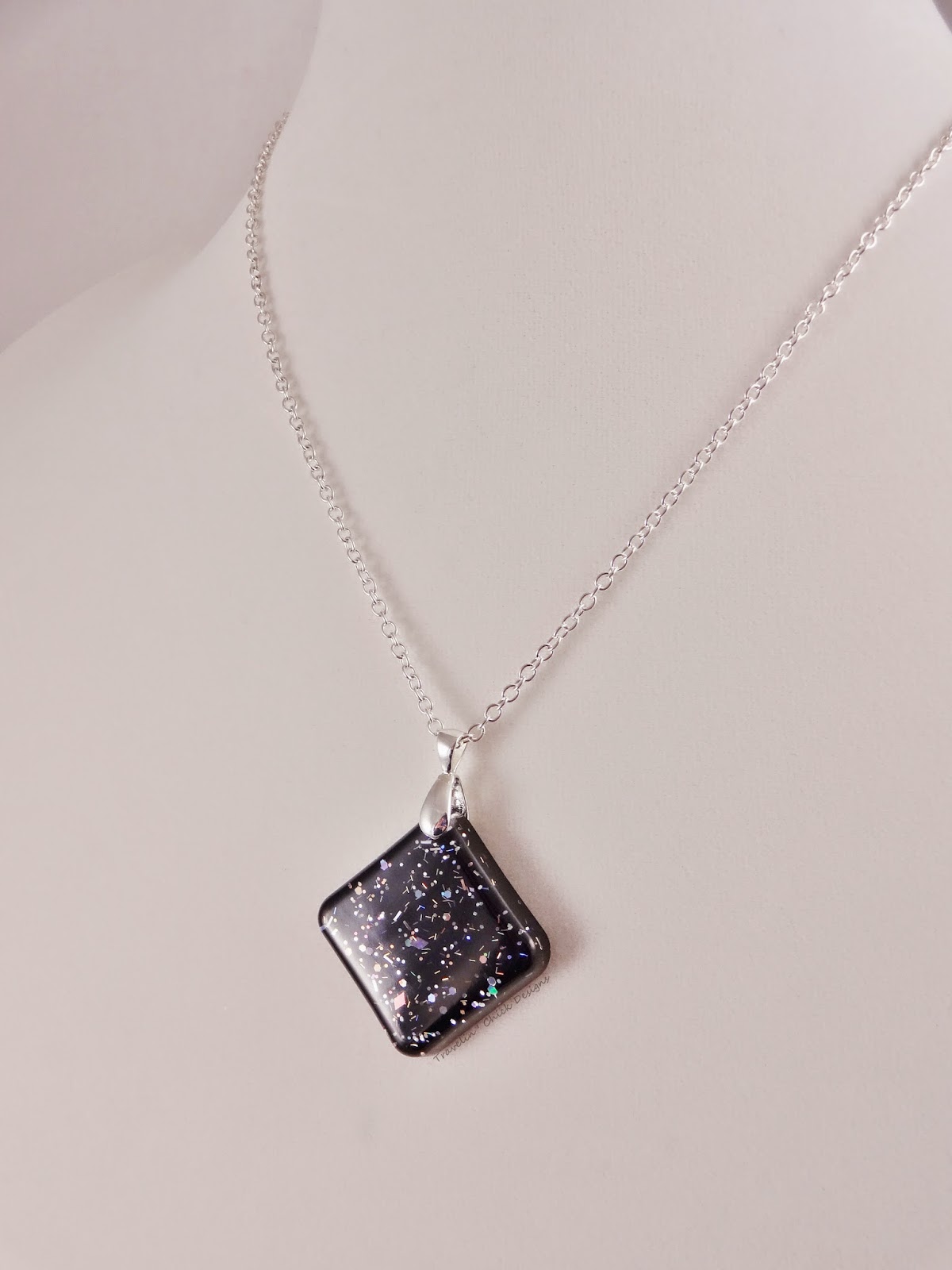 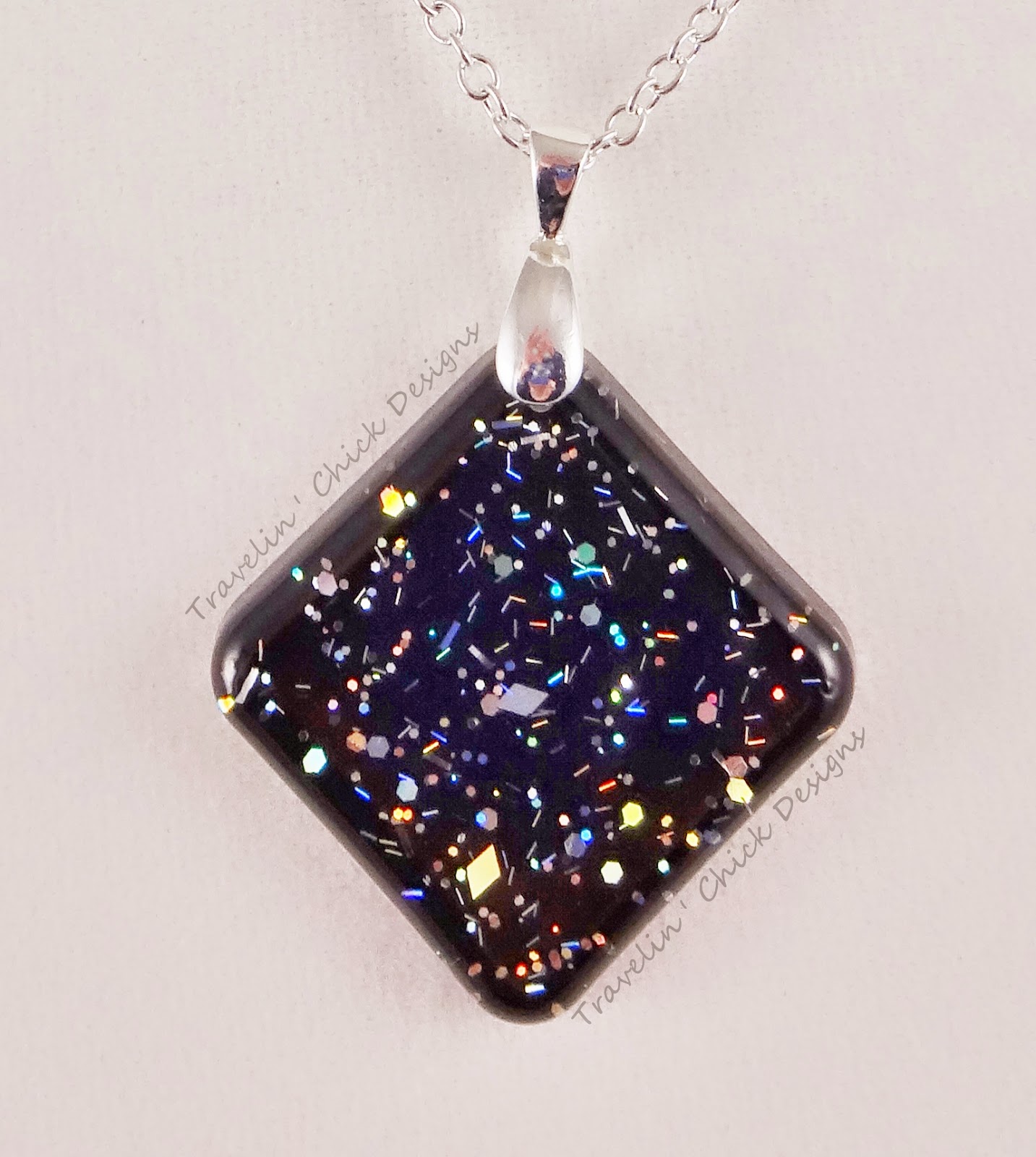 Dark gray 'Grifter' resin pendant: It's the same glitter as the pendant above but it's domed with a dark gray, shimmery pigment. I never thought to put the polish on top of gray. I love the look.
The chain is 17 inches and can be adjusted to 19 inches long. 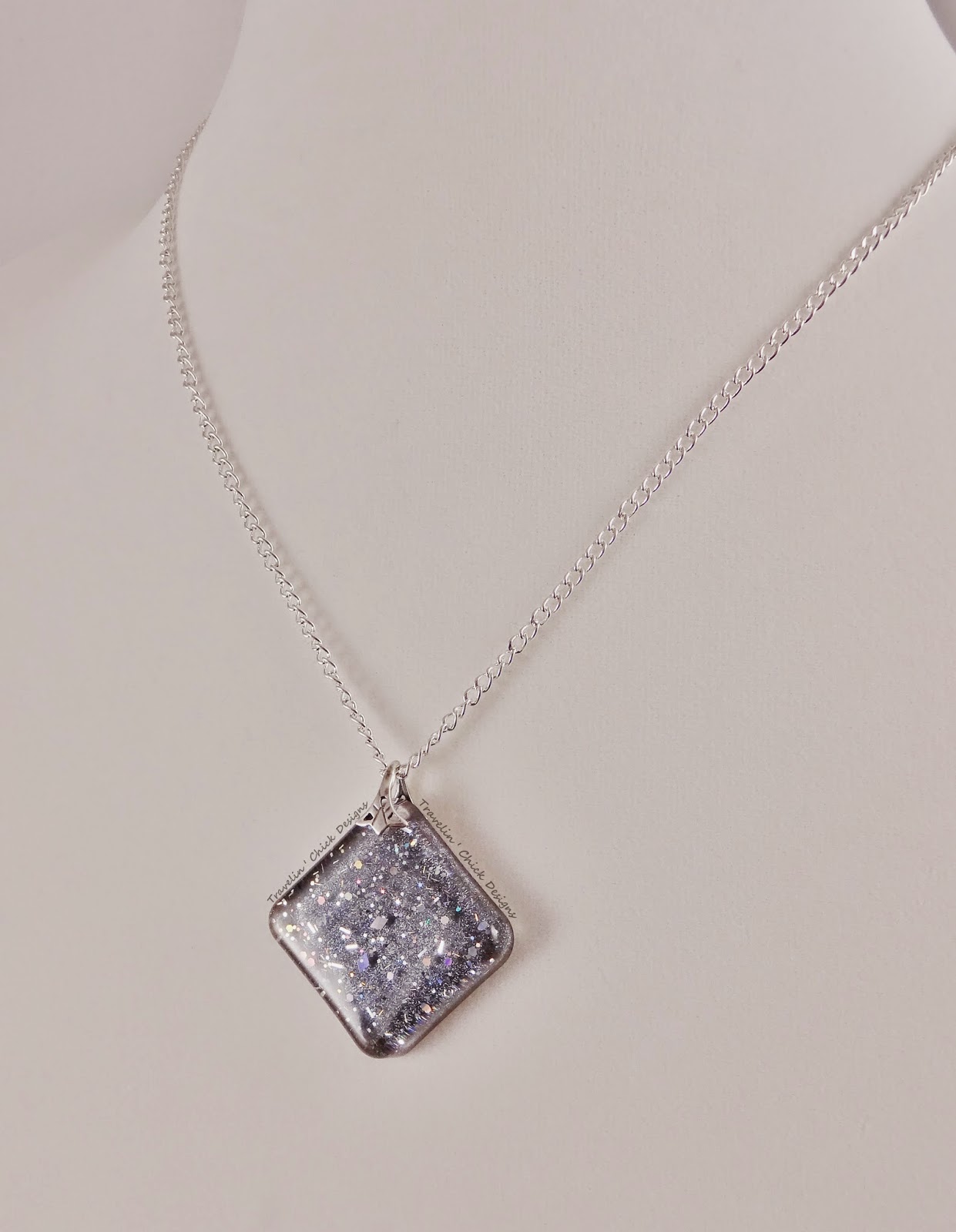 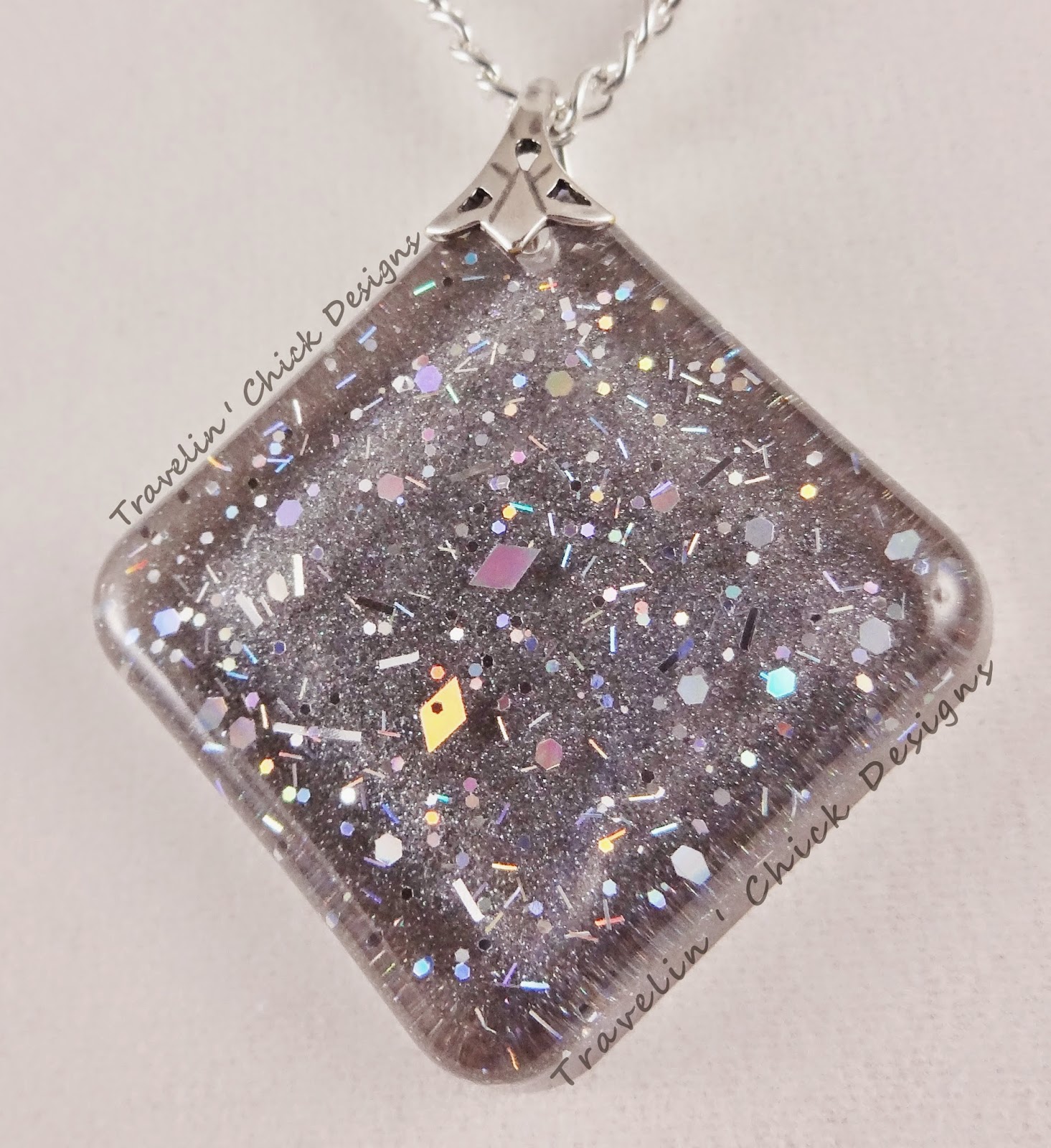 Light gray 'Grifter' resin pendant: This is the same glitter in the pendants above with an even lighter gray pigment. Looking at all three in a row reminds me of gradient nails (some people call it ombre). This pendant is a circle but I can make it into a square as above or into an oval or rectangle.
Chain is 17 inches, can be adjusted to 19 inches long. 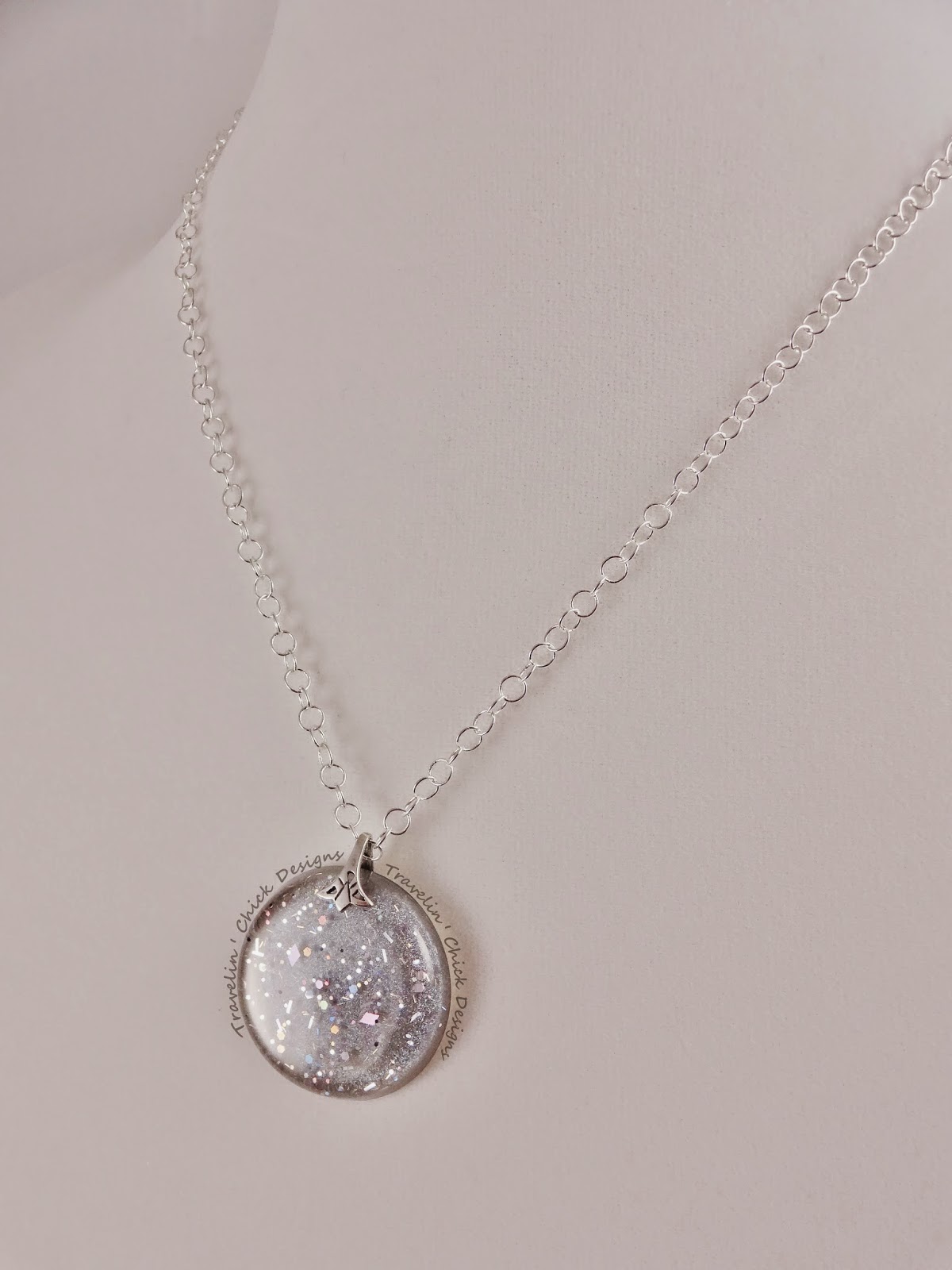 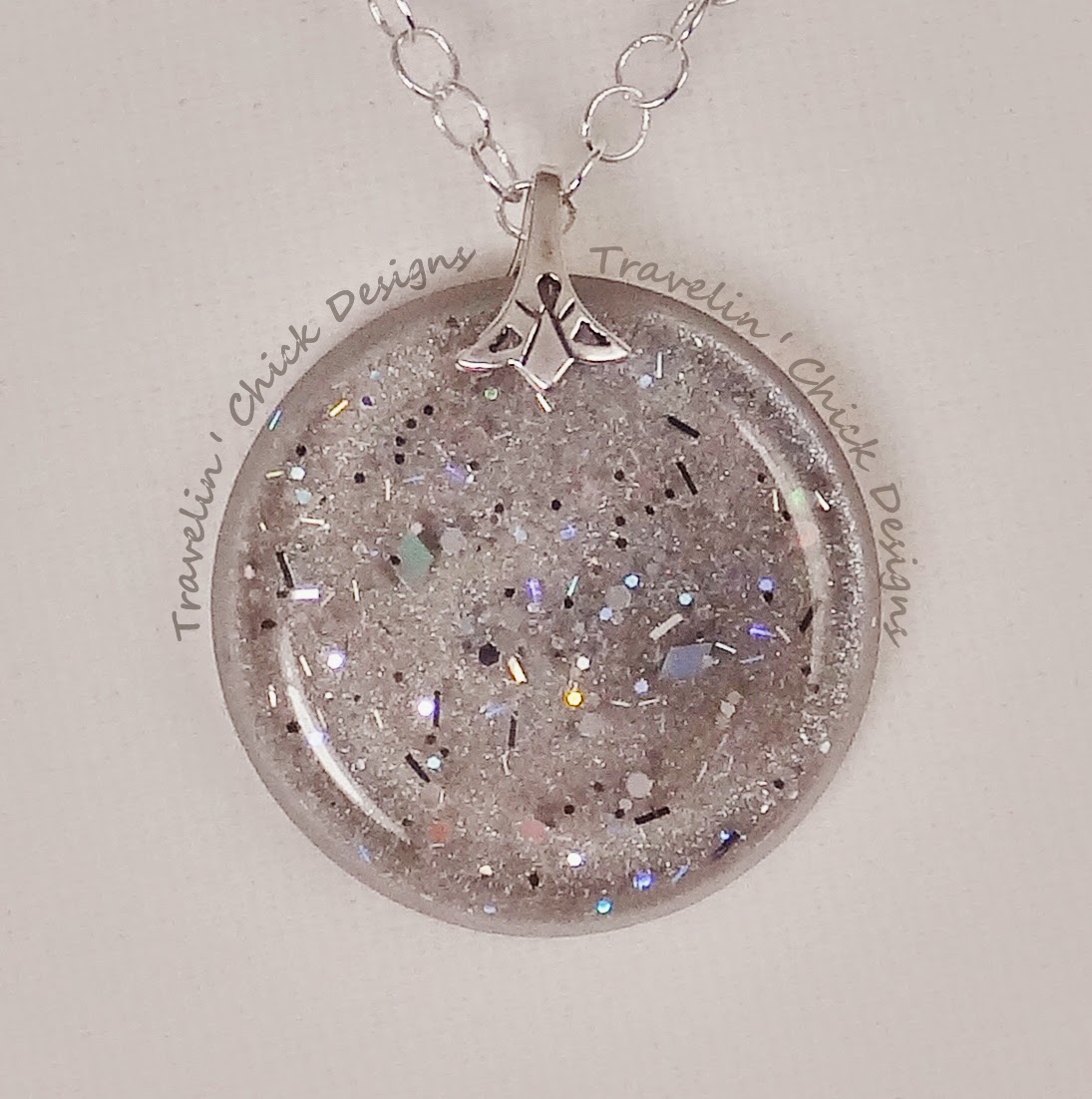 'JJ' was inspired by the character Penelope Garcia on my favorite show, Criminal Minds. Garcia wears a lot of crazy colored clothing and I decided to base a few polishes off her attire. This one came from the episode 'J.J.'.
Yellow 'JJ' resin pendant:Metallic yellow, navy blue, and black glitter make up the glitter mixture in this pendant. When I paired it with the bright yellow pigment, I was in heaven. This baby REALLY shines in the sun. It catches the light really well and it's hard to not notice it.
Chain is 17 inches, adjusts to 19 inches. 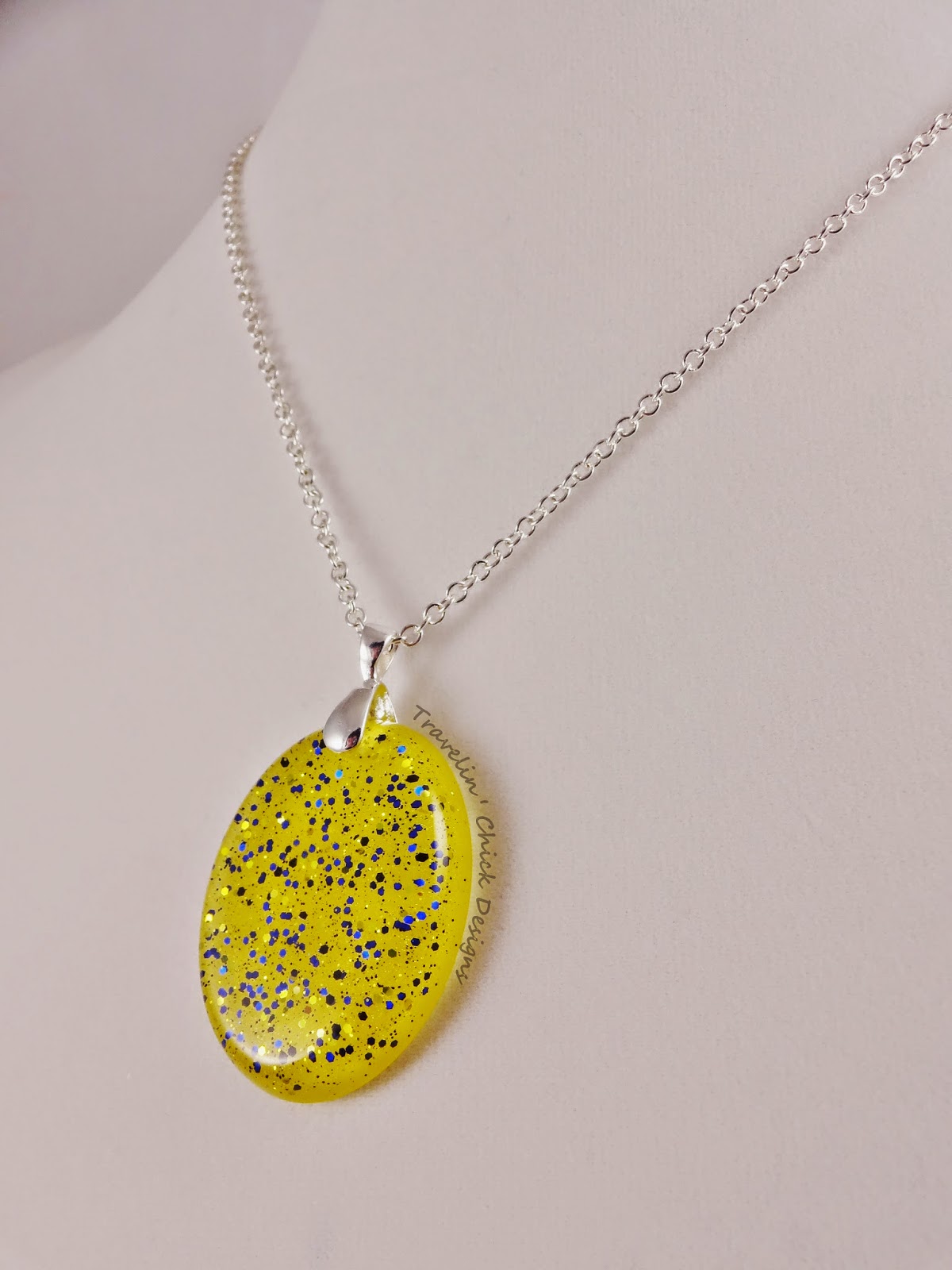 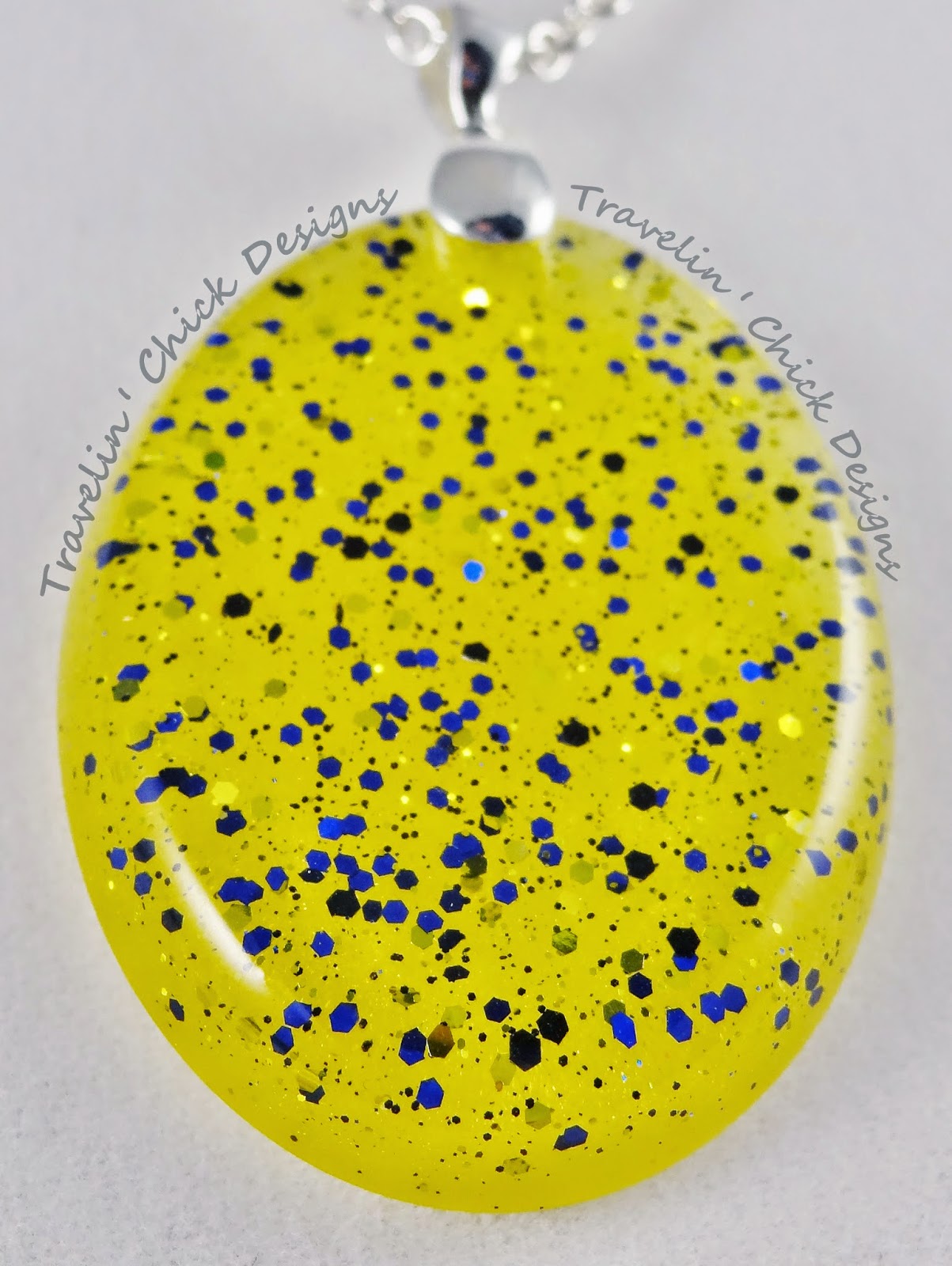 'Jones' was also inspired by clothing worn by Garcia on Criminal Minds. The name of the episode was called 'Jones' and introduced us to J.J.'s future husband, Will.
Blue 'Jones' resin pendant: Purple, pink, light blue, and a little bit of black makes up this glitter mixture. If you click the link to the old RCL blog above, you can see a macro shot of the glitter on my nails. This mixture is fun because it is versatile. I have several blues to use as the background on the pendant and several blue options.
Chain is 17 inches, adjusts to 19 inches. 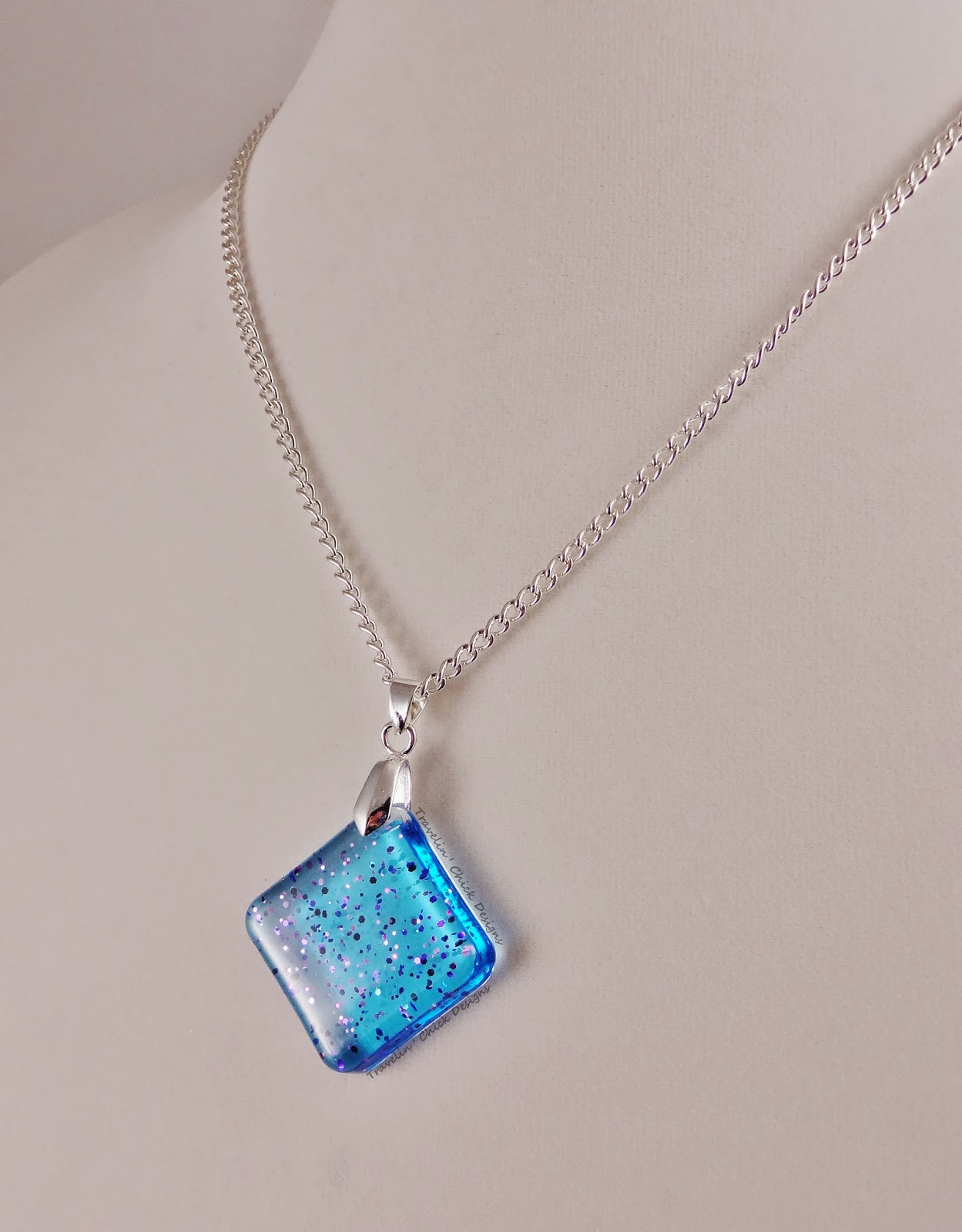 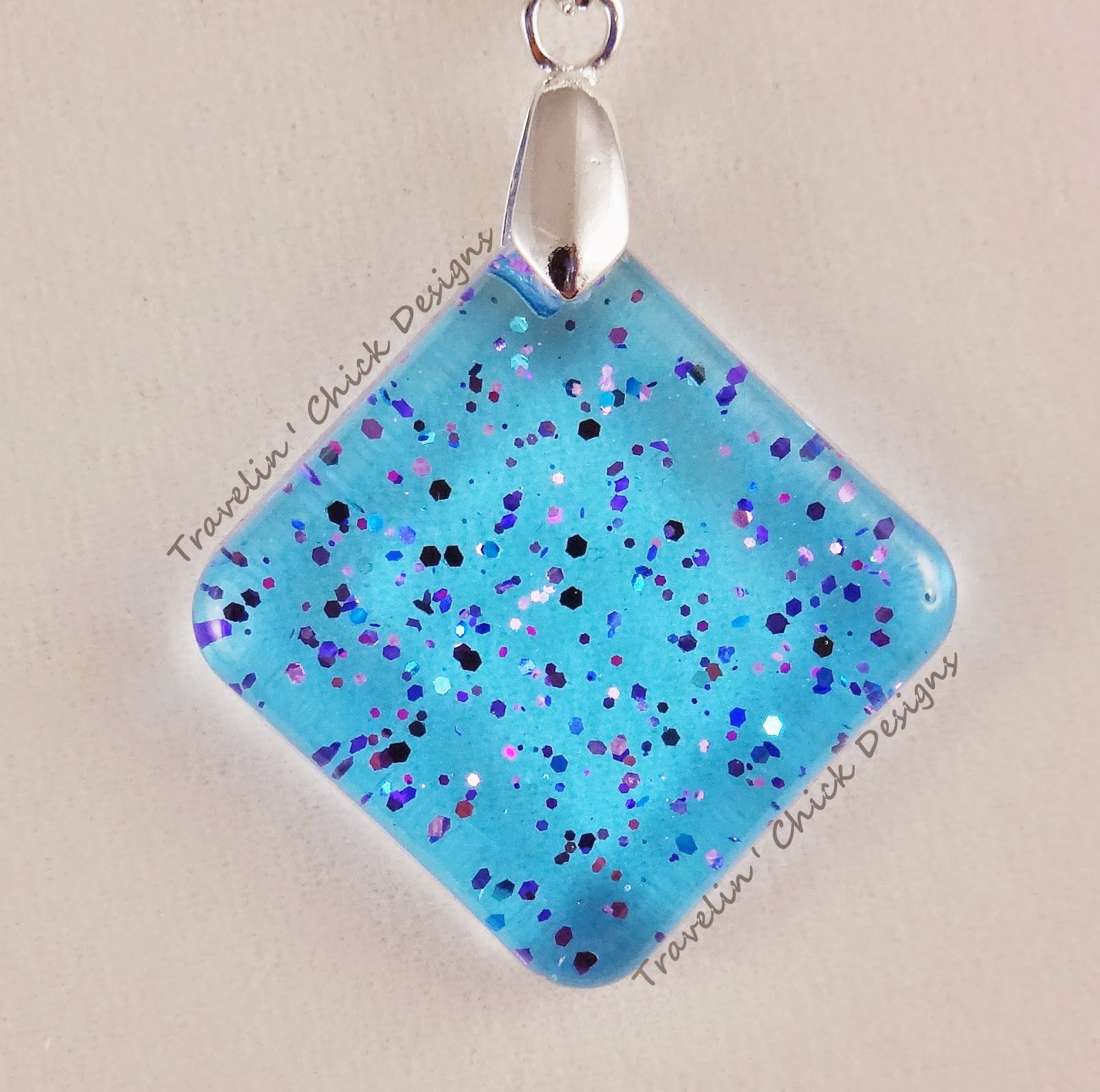 Last, but never least... one of my most favorite polishes that I ever made/experimented with (and possibly the best swatching photos that I ever accomplished).

'Toula' was inspired by one of my favorite movies, My Big Fat Greek Wedding. Blue was so big in the movie... bridesmaids dresses, invites, flags, and of course the Windex.
Blue 'Toula' resin pendant: There are several shades of blue glitter mixed with silver in this pendant. I plan to experiment with a darker background but I do have several different shades like this one.
Chain is 17 inches, adjusts to 19 inches. 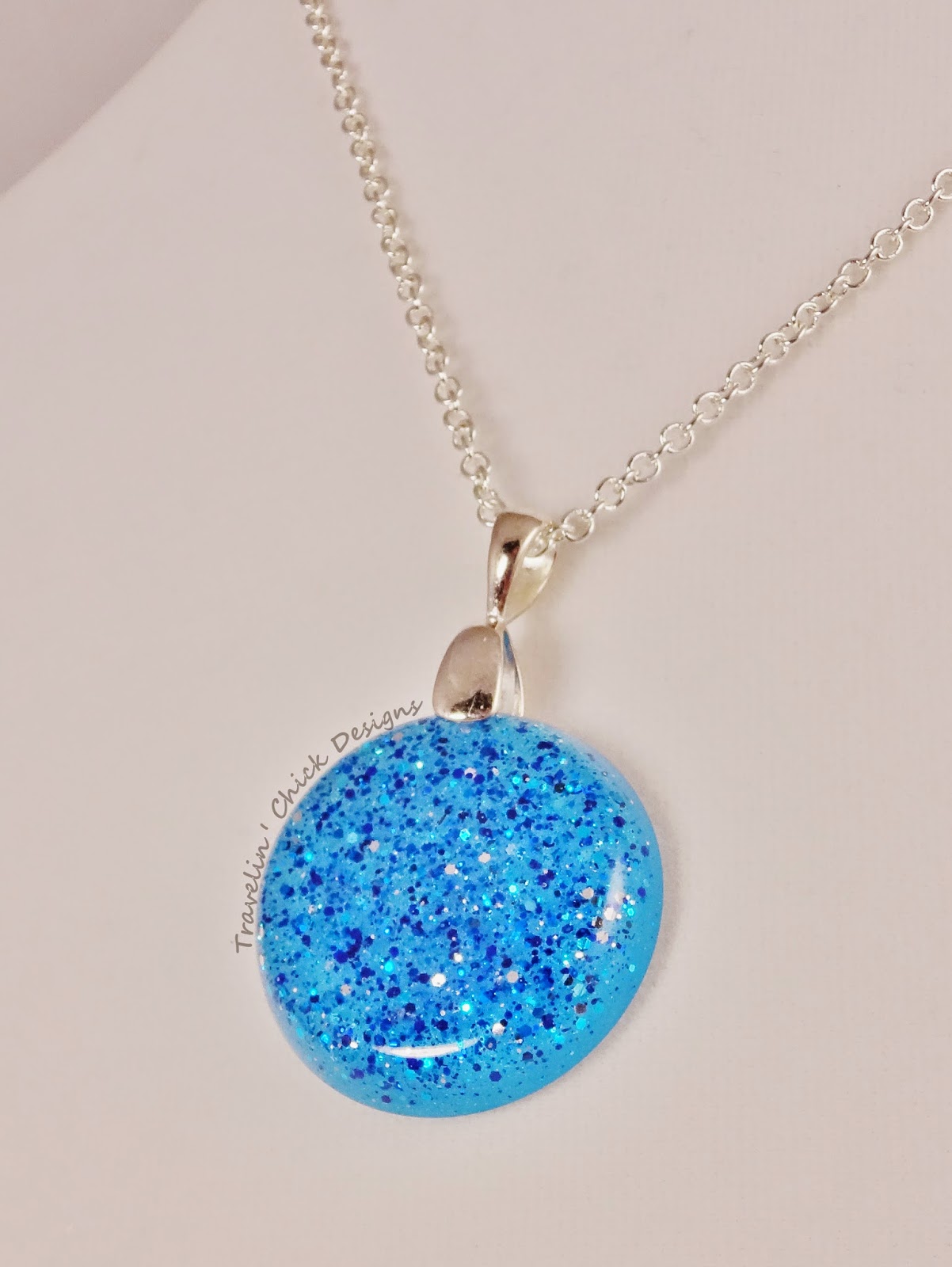 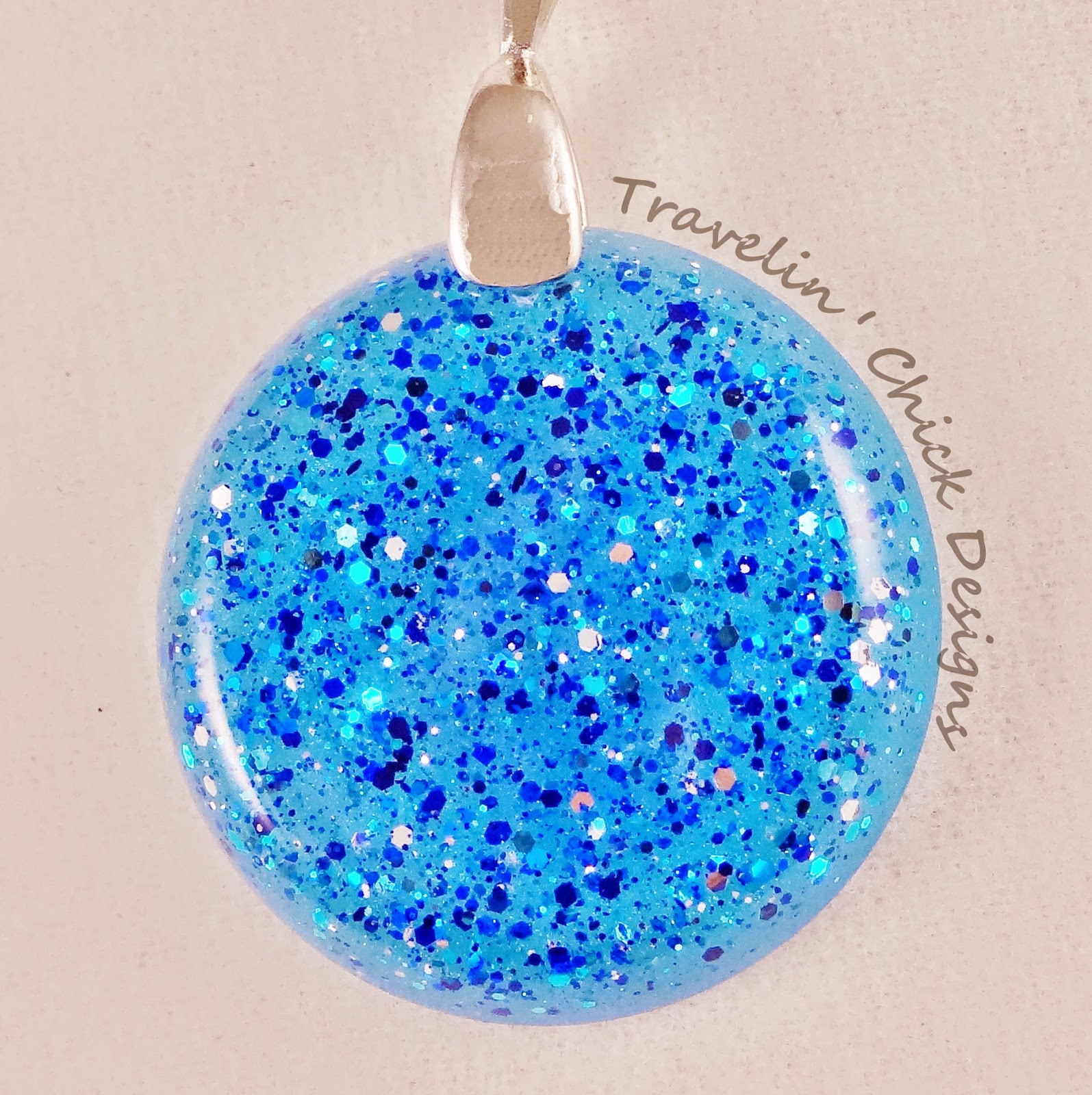 All of the above pendants are now in the Etsy shop. I'll be adding more in the next week.
Stay tuned!