When we renovated our kitchen in late 2011, we knew that we wanted to get a new kitchen table.

But we had no idea what we wanted, other than to ditch the current table that is almost older than my husband. We ditched the chairs during the remodel (falling apart, old vinyl) and ended up just getting a few unfinished chairs from IKEA until we could find something better. I stained those to match the cabinets back then.

A few months later, we found what we were looking for.

This is the Portland Corner Bench from Whittier Wood Furniture: their site shows the Trestle Bench  and Table, too. 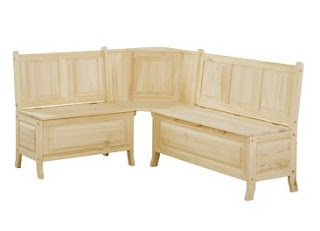 I cannot remember what website we got this from but they dealt with primarily unfinished furniture.

I could have had a wood working place do it for me... for 400+ bucks. No thanks. Stain is cheap and I am not afraid to get dirty.

I was going to start it once it got here but then it got cold. And since I needed to be able to sand every piece, stain it, then sand, then poly it, then sand again and apply more poly, I knew it had to be an outside kind of job.

Since Spring was already in full swing due to a seriously mild winter and March temps hitting the upper 70's, we pulled the cars outside of the garage to give me the room that I needed.

I think it took a solid week. And when I say solid, I mean 8-12 hours a day out in the garage. Every piece had to be done separately and I didn't have a big table to work on. (My husband ended up setting his sawhorses up for me with OSB across the top, forming a table.)

Each piece was sanded by hand (too many crevices and too much design to use an electric sander). Then I had to stain the pieces and wait for that to dry. Then go back with a second coat of stain to get the color that I wanted. (I realized too late into it that I could just let the stain sit a tad longer on the first coat and then wipe, and get out of having to do a second coat. Oh well. Lesson learned.)

After each coat of stain, I had to sand. Then it was time for the Polycrylic. (The stuff that makes it shiny and seals out the water and other stuff that can damage wood.)

Since it was going to be used in the kitchen and used A LOT, I had to do several coats of poly, sanding between each.

And then I was done.
We had a kick arse table.
With storage in the bench! 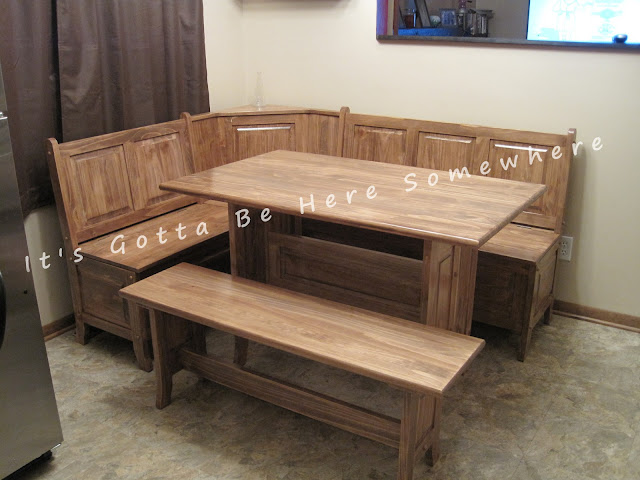 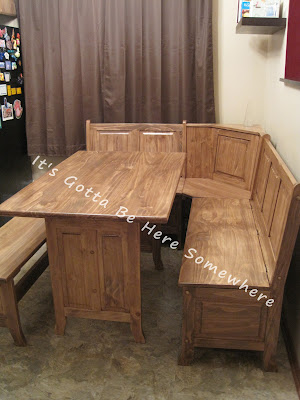 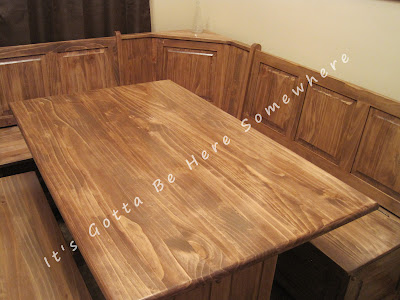 Almost a year later, I still love my table.