No, Really...Two is Enough for Us

The question. That dreaded question that my husband and I began hearing just a mere half an hour after our officiant pronounced us husband and wife.

"When are you two going to have a baby together?"

Hmmm, let me check my calendar. How about 2 months from never?

It drives us crazy. Even our mothers just don't seem to understand why we are choosing to not have a baby.

Below is a list of reasons, sound ones I might add, detailing why we don't want to expand the family. Some explanations will follow a specific question that we are asked.

~ My husband has 2 little girls. That makes 4 of us in a house that we are already growing out of and a new baby would only make the space constraint worse. We have 3 bedrooms, not 4.

~ Financially, we are 'making it work' with there being 4 of us. Adding another child would be, financially, an irresponsible thing to do.

~"But don't you want to have a child that is yours?"
As far as the kids are concerned, they are mine. I have been with them since Peanut was only 2. She doesn't ever remember me not being here with her. And since Button has a less than stellar memory with most things, she doesn't recall a memory without me being in it.
This question usually makes me angry. I have to give birth to make my life mean more? Certain children mean more because you birth them? Try telling that to the MILLIONS of children that get adopted by loving families. Why are step-parents and adoptive parents looked as at less than parents? It made me so mad last year around Mother's Day that I made this and pinned it to Pinterest.

~ "Wouldn't you be happier if you actually got to experience the miracle of childbirth?"
Bwhahaha. No.
I don't feel that I need to go through weight gain, massive swelling, uncontrollable vomiting, contractions, hemorrhoids, possible bed rest, mood roller-coasters, drugs to dull the pain, stretchmarks, and strangers wanting to touch my belly. Due to having a ruptured disc and surgery to fix it in my early 20's, I have already had 3 epidurals. I already have a ton of stretch marks due to losing weight. And I've had hemorrhoids before, thanks. And I don't like strange people being close to me, let alone feeling any part of my body.

~ Feeding off of the above when I mentioned my back: I have had spinal fusion between my L4-L5. If you don't know anything about spines, that's the second to last disc above my rear end. Pregnant women have a hard time with back problems. I am not willing to take a chance that my fusion could snap or that it could leave me paralyzed. I am not even supposed to go on roller-coasters! When I talked to the doctor about it, he didn't say "you cannot have a baby". He just had that look on his face that if I chose to have one, I could really have hell to pay. And the possibility of entire pregnancy bed rest is enough to make me say no no no. And due to the fact that I had to go back to see my doctor in December because I'm experiencing some of the same pain as before surgery below the fusion, there is no way I am considering pregnancy.

~ Peanut was still in diapers when I met her and let's just say that kid had butt rot. And she couldn't bathe or dress herself or tie her shoes. So in my mind, I've done the things that mommies do when they have a baby. Why do I need to have a child when I have already done those things? I'm not missing out on anything.

~ "I bet the girls would love to have another sister or maybe a brother!"
Yeah, no. We asked the kids if they would want another baby in the house. The answer was a simple and firm 'no'. They both know that to have a baby, they would either have to share a room again OR one of them would have to share a room with a baby. It's not going to happen. They were less than thrilled with that idea.
And due to the fact that Peanut was the poster child for willful/stubborn and threw more tantrums than an entire preschool class on her own, I don't think the rest of us are willing to take a chance that another baby might be the same... or worse. (Read Button's latest quote on the Kid Quotes page.)

~ Button said it best during our last chat about it: "There's 2 of us and 2 of you. That way, no one is ever left out. If one of you is playing with me in my room, the other can play with Peanut in her room."

So, the family has spoken. And in our family, what we all want will always be the most important 'want'. Sorry, mom. 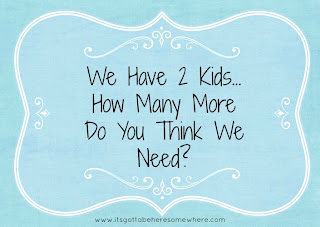