To School or Not to School, at Home: Part 4


This is the 4th post in the Why We Want to Homeschool Our Kids series.
Part 1
Part 2
Part 3

Other studies have shown that children that are homeschooled score higher GPA's in college, earn more college credits before entering college, and earn more credits while attending college.
Another study showed that more homeschooled children, after college, were more likely to vote and are more involved with their communities.

For thousands of years, there were no institutionalized schools. Children learned at home, with their parents. Most parents teach their children to speak, walk, read, eat, bathe, go to the bathroom, and more. But then they send them off to strangers to teach them the rest.
Why?
How is anyone other than the parent more qualified to teach their own children?

And although homeschooling fell out of popularity for years, the above figures should be proof to anyone that the homeschooling trend is growing bigger each year. 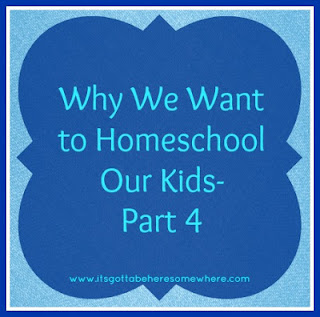