How should I know what a fox says?


While visiting my family down south at the end of October, we attended one home football game, one band competition, and one away football game. For the away game, the band was paying tribute to their seniors.

Each section of the band dressed as a different animal: cows, ducks, foxes (seniors), zebras, etc.
The color guard decided to be peacocks and I got to make tutu's. Yay. Just kidding, I enjoyed it.

Manda, the twins, and I went to Joanne Fabrics and picked out some tulle for their no-sew tutus, which I knew how to make due to making one each for Button and Peanut a couple of years ago.
The skirts are pretty easy to make but 2 of the different colors of tulle had glitter and I'm pretty sure it's still on my tennis shoes.


Here's Noodle in her tutu, warming up: 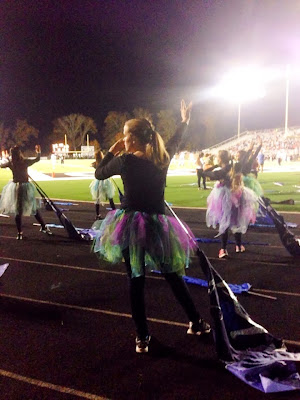 And here's Bug, doing her warm-up: 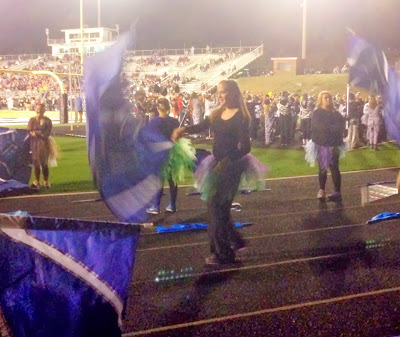 The band did most of the normal show: But towards the end, there was a twist. All of sudden, the all dropped their flags and instruments and went towards the home sideline and lined up, like this: sorry for the crappy pic, I only had the iphone with me

Over the loudspeaker, you could hear the song What Does the Fox Say? start to play and then the band started to boogie. (I had never even heard the song until the girls starting showing us the dance and talking about it. Yeah, I'm not in the loop.)

It was funny and the home side of the stands cheered pretty loud.

Manda and I were breaking it down in the bleachers when during a time out, Tom Jones' 'It's Not Unusual' began to play. And again a little while later when House of Pain's 'Jump Around' came on.
Good times. I love that she will be a complete idiot with me. That's true friendship.

We had fun and it wasn't freezing. Can't wait until next season!

Funnily enough, that week was my first introduction to 'What Does the Fox Say?' and the Saturday after the band did the dance, SNL had a skit featuring Kerry Washington doing a parody of the song.
And that song was stuck in my head for days.