The first Saturday of our trip down south was a blast from the past for me.

The twins are in color guard and the band was in a competition. I have been to band competitions before, back when I was one of them.

But I haven't been to a competition since I was IN a competition. So, I was really interested to see what had stayed the same/changed. And since my husband and kids had never been to a band competition, I knew it would be fun for them to see the other color guards and hear the bands.
(Manda is a fellow ex-band geek so she knew what was up.)

We had to drive a little over an hour south of their house to get to the stadium where the competition was being held. And thank GOD is was about 10 degrees warmer that night than the night before.

When we got there, we headed in to try and find a seat.
Um, I don't remember that many spectators at the competitions of my youth.
Seriously.
THERE WERE NO SEATS AVAILABLE.
We ended up getting food and standing around the track and watching the other bands.

The twins were pros at competitions by then since they'd already been to 2 others this season (Grand Champion of the first and second place in the second one.)
We watched with rapt attention and cheered on the band and the guard, who did fabulous.

During the break between each band, there was an announcer doing "Shout-outs" for those people that paid to get one. And the announcer could not have been more monotone. Not Ben Stein bad, but close. That's were the title of this post came from... imagine hearing someone over the speaker ending a shout-out from "love, your mom" in an almost Ben Stein voice.
And I don't think I've heard anyone say "tricky, tricky, tricky" with that small of an amount of enthusiasm. But it made us laugh... and still is!(By the way, after that night and all of the tricky, tricky, tricky jokes, I have been singing RUN-DMC It's Tricky almost non-stop.)

After the performance, we went to stand in a loooong line to get the twins a t-shirt to commemorate the night. Sadly, it was a long line that moved sooooo slow. They were making the shirts right then and there with whatever design you chose. I think we were in line for half an hour.

BUT it gave a great place to view the college exhibition band that night which was great. And huge. That band had over 420 members!

When the awards were given out, we yelled pretty loud.
The twins band received 1's in every category and won GRAND CHAMPIONS!

We went out onto the field to meet the twins after the award ceremony was done and took tons of pics of them with their family and friends at the last competition of the year.


My four favorite kids, EVER: 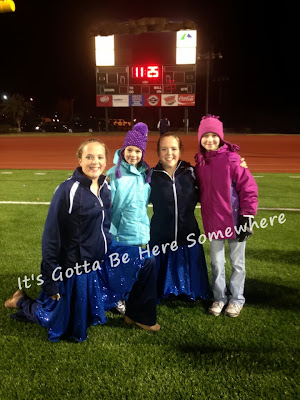 The twins and their proud Momma: 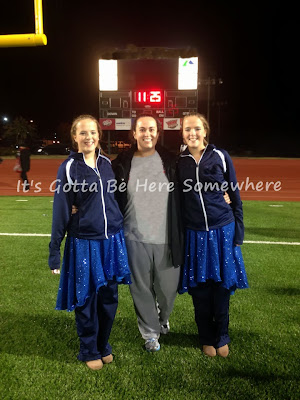 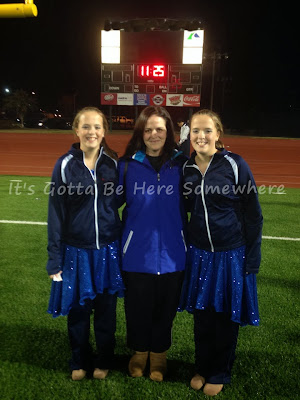 Yes, I realize I am wearing sweatpants.
IT WAS IN THE COUNTRY AND IT WAS COLD.


Can't WAIT until next football season when the twins will be sophomores (sob!) and the show and costumes are totally different.