Our Halloween was cold and rainy, dagnabit

Last year, when we still lived in Minnesota, we were in Chattanooga during Halloween visiting family and going to a home football game, one away football game, and a band competition.

During that home game, it was 34 degrees, the competition being slightly better (warmer) the next night. But on Halloween, it was 72 degrees with a little sprinkling after the candy gathering.

This year? The year we live here? It bottomed out a bit and dropped into the 40's and of course, there was wind and rain. The twins had a football game and the band left early due to the sleet falling on them in the stands.

I would like to put the blame on the numerous Elsa's and Olaf's I saw on Halloween. I guess for those kids, it was more realistic if we were all frozen.

But as bad as it was here, it was worse up in Minnesota and Wisconsin, where it was actually snowing. Poor kids. You know it sucked to have to wear full winter gear over the well-planned costumes.

Instead of hiking up and down the hills of our neighborhood, we went to a Halloween Block Party in Cleveland, TN. It has become a really popular event. They had food vendors, craft vendors, tons of people in costume,  music, and CANDY. The M&M/Mars company has a factory nearby and they hand out candy to everyone, not just the kids. But more about that in a minute.

I spent more time than I liked figuring out what to do with each kid's head. I tried the sock bun thing on Peanut and was ready to chuck the sock straight out the door. Never again. I tried a regular bun but the hair on that head seems to have tripled in thickness. Finally I achieved a bun that I could live with. Actually, I loved it. It reminded me of a cinnamon roll. 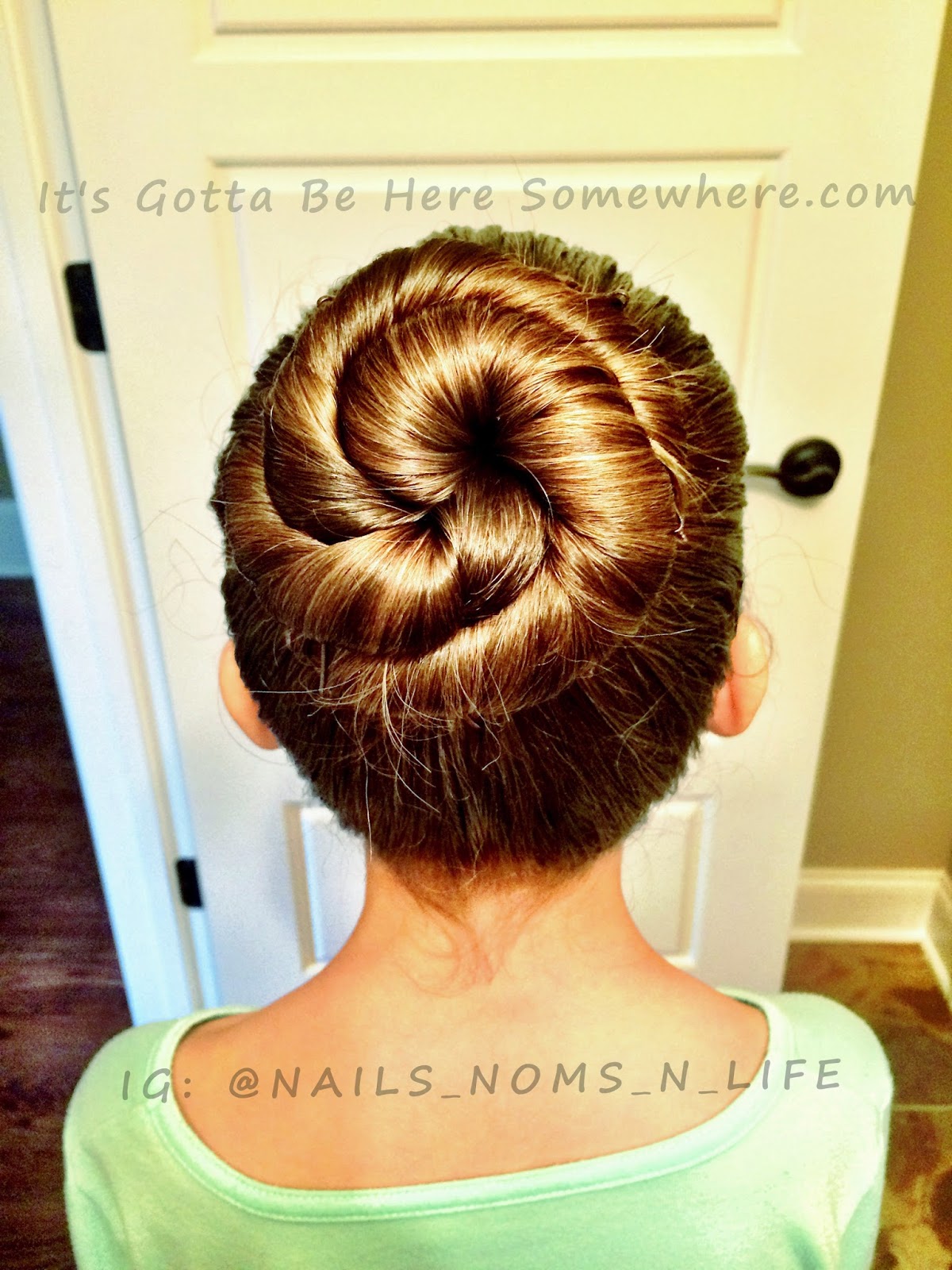 I already had her hair in a ponytail so I separated a piece out and twisted that around into a bun. I pinned it with bobby pins. The other section ended up too thick (geez with the hair!) so I split it into another piece and twisted that around as well, securing it with more bobby pins. I took that last piece and twisted it around the previous two pieces. I think we used 20 bobby pins to hold it into place. I made sure she KNEW that she better be careful with her head the rest of the day (the child is hell on her hair).

For Button, I wanted her hair half up. I decided to get my curling wand out and give her hair some body. She has really thick hair too but it's confused. Some of it's curly, some is wavy, and then there are a few strands that are almost stick straight. It wasn't hard to curl but MAN that took a little while. My hair would have been done 15 minutes in but she had about 3 times more hair. It took forever but she LOVED it. 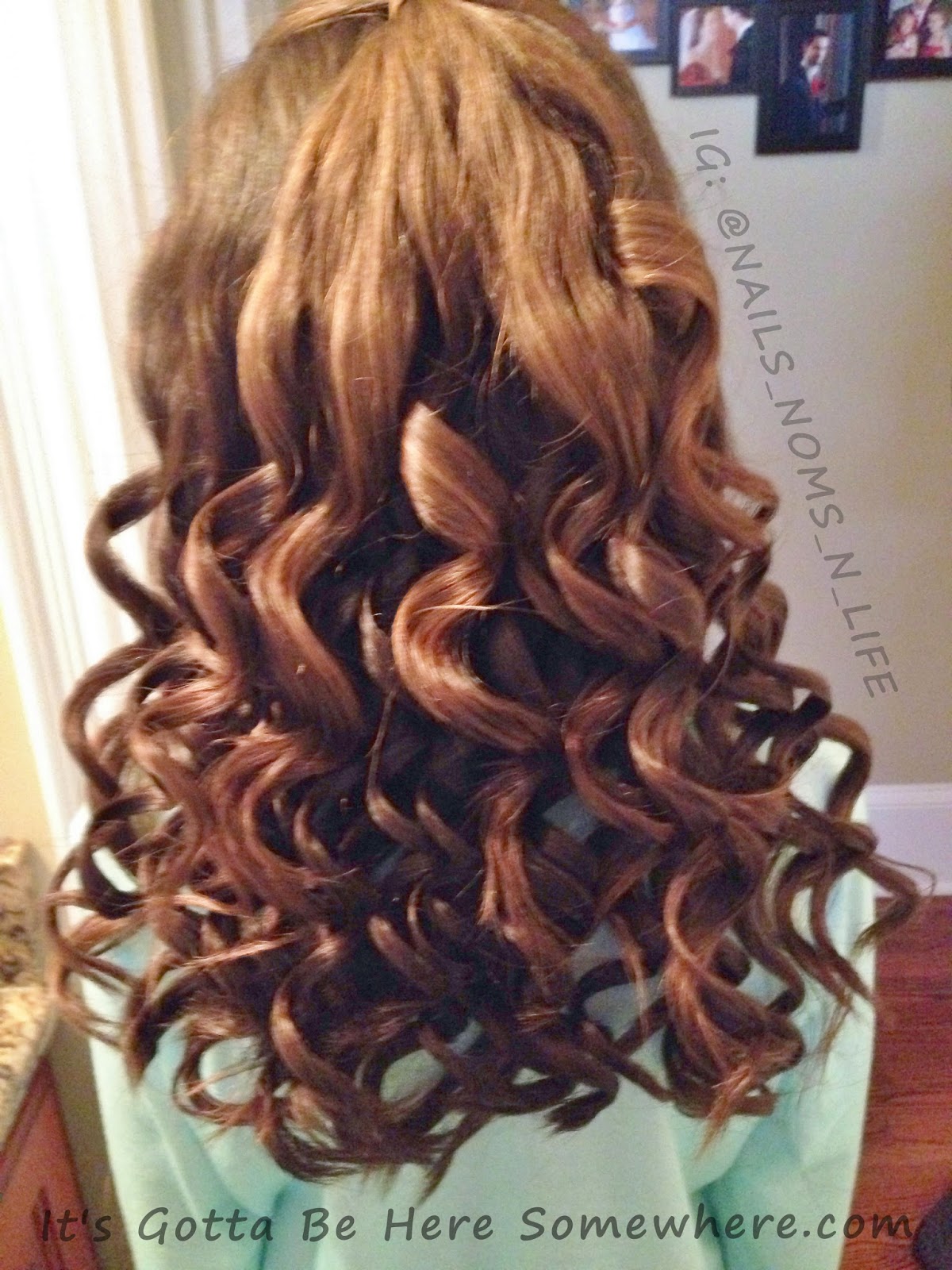 Normally I would have run my fingers through it but since we weren't leaving right after I was done with it, I left it alone. Over the course of the next few hours, it relaxed a little on it's own and looked great.

Before we got them dressed, it started to rain. On Halloween. Nice joke, Mother Nature. Cold on Halloween is one thing but rain can ruin a costume. It was raining hard so we decided to get them dressed and drive up to Cleveland and see what the weather would do once we parked.

We made sure they had tights and sweats on under their dresses to help block the cold a little. And I was so thankful we chose dresses that didn't have to go over their heads.

Ladies and gents, may I present a Diamond Fairy and a Candy Princess: 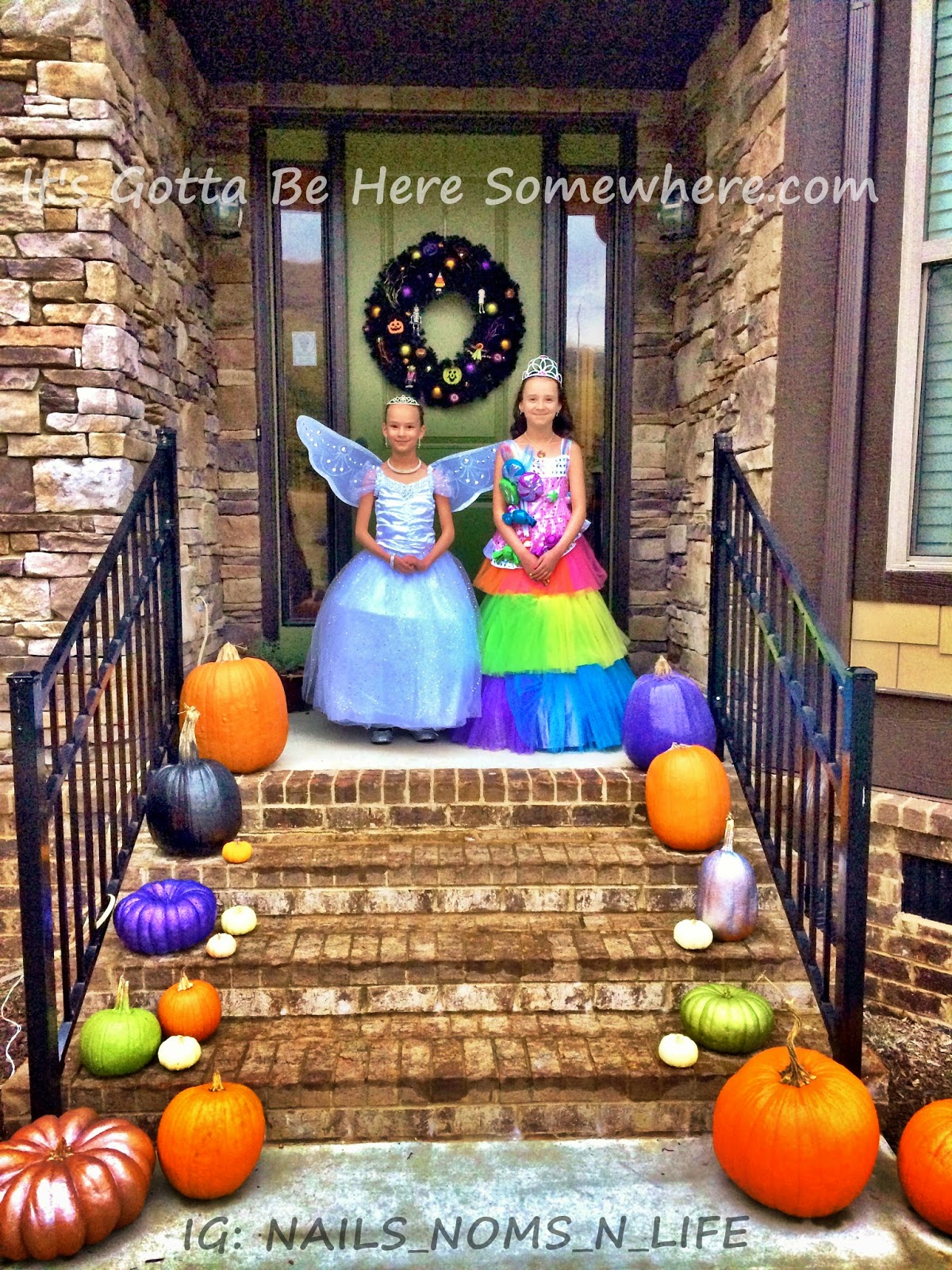 I loved their costumes. I painted Peanut's nails with China Glaze Glistening Snow (what I used in this mani) to match the sparkle on her dress and all of her jewels. Button's nails were neon Skittles to match the colors in her dress. 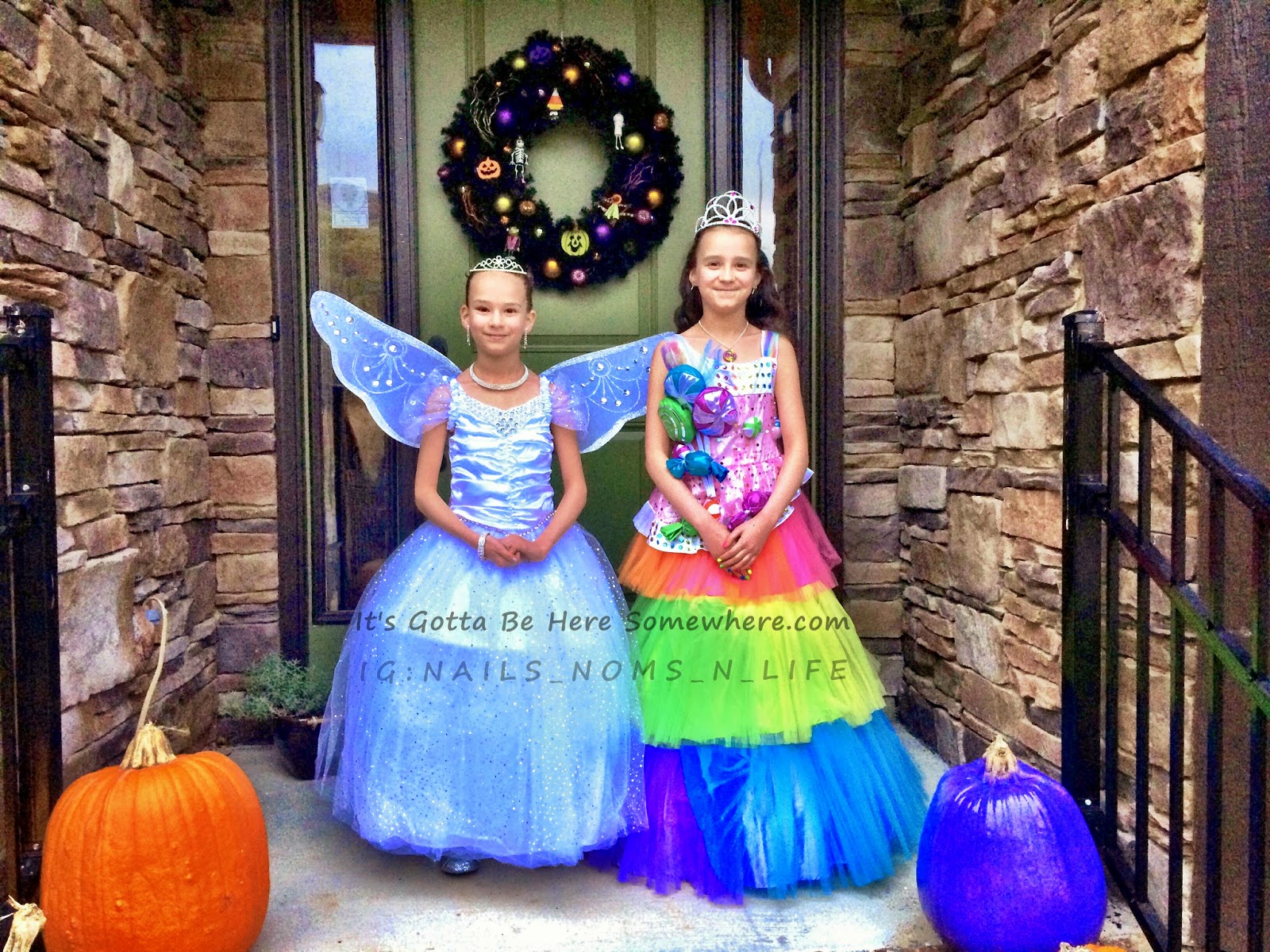 We had fun at the Block Party but the kids were not warm and the rain was irritating. (Yes, we had umbrellas.) After getting the candy from the M&M/Mars people we left and went to get warm clothes at home. You may be thinking "But that's not a lot of candy".
Bwhahahaha.


Sorry. Here's a pic of the candy haul. 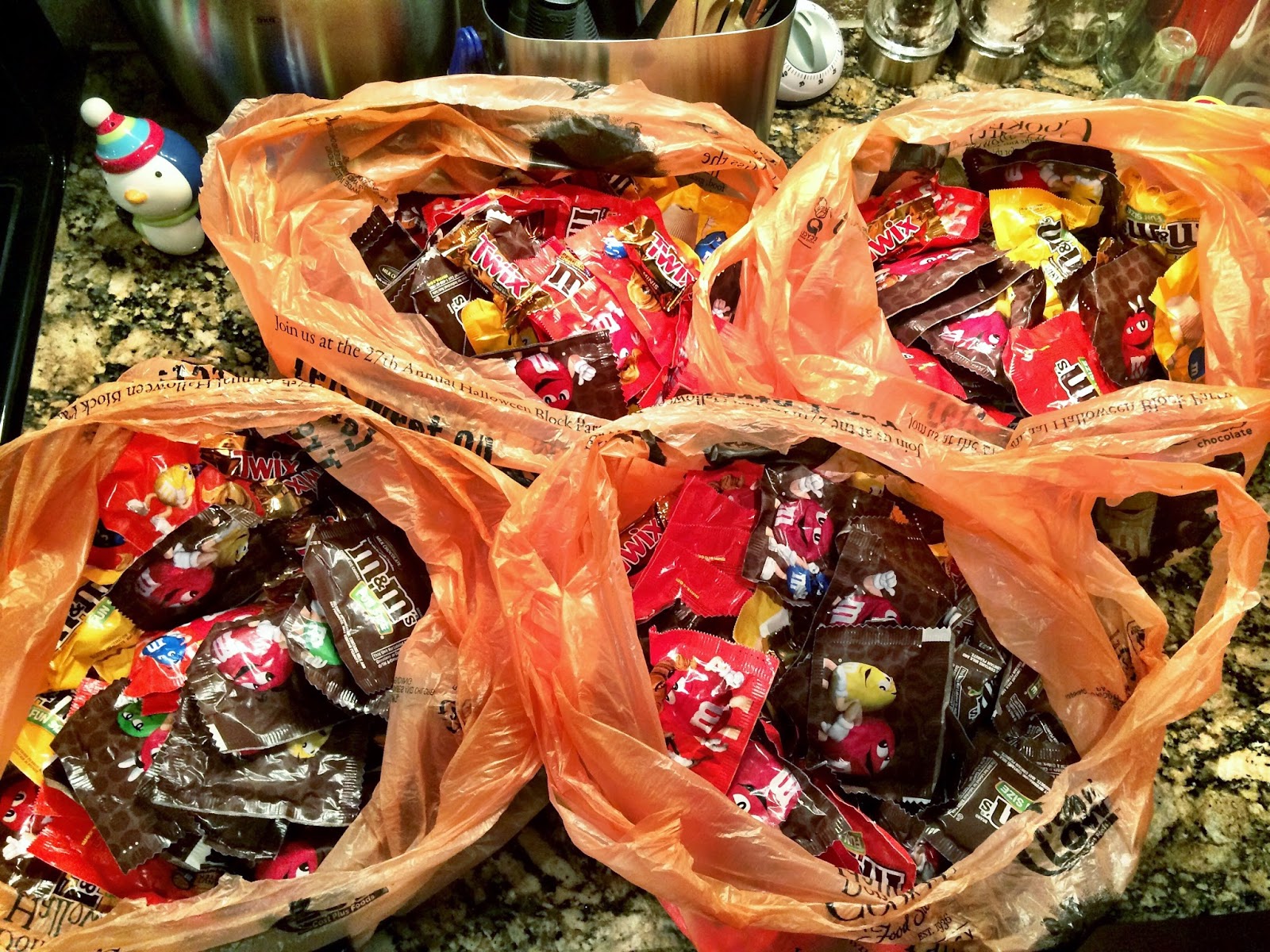 
Hope you all had a safe and happy Halloween! Here's hoping next year will be a little warmer and dryer.